Woke up to a fault with our Baxi Solo 3 40 PF not running. Boiler ON light lit but nothing else, pump is running.

Did the reset and no change, left it off for 30min then switched back on. There was a loud chattering relay sound from the PCB and then it lit as normal. Shortly after I could hear an air lock type banging from the water pipes at the top of the boiler and then a minute or so later it switched off again, Boiler ON light remaining lit.

It will not then attempt to relight unless I leave it off for a 20mins. At which point it repeats the above,

As background, for the past few weeks there has also been a chattering relay type sound whenever the CH reaches the set temp.

I've removed the PCB for a visual inspection and can see an area of discolouration and soot around the ceramic 470K400 cap and resistors see attached pic. Obviously that's not a good sign, should I just replace the PCB? 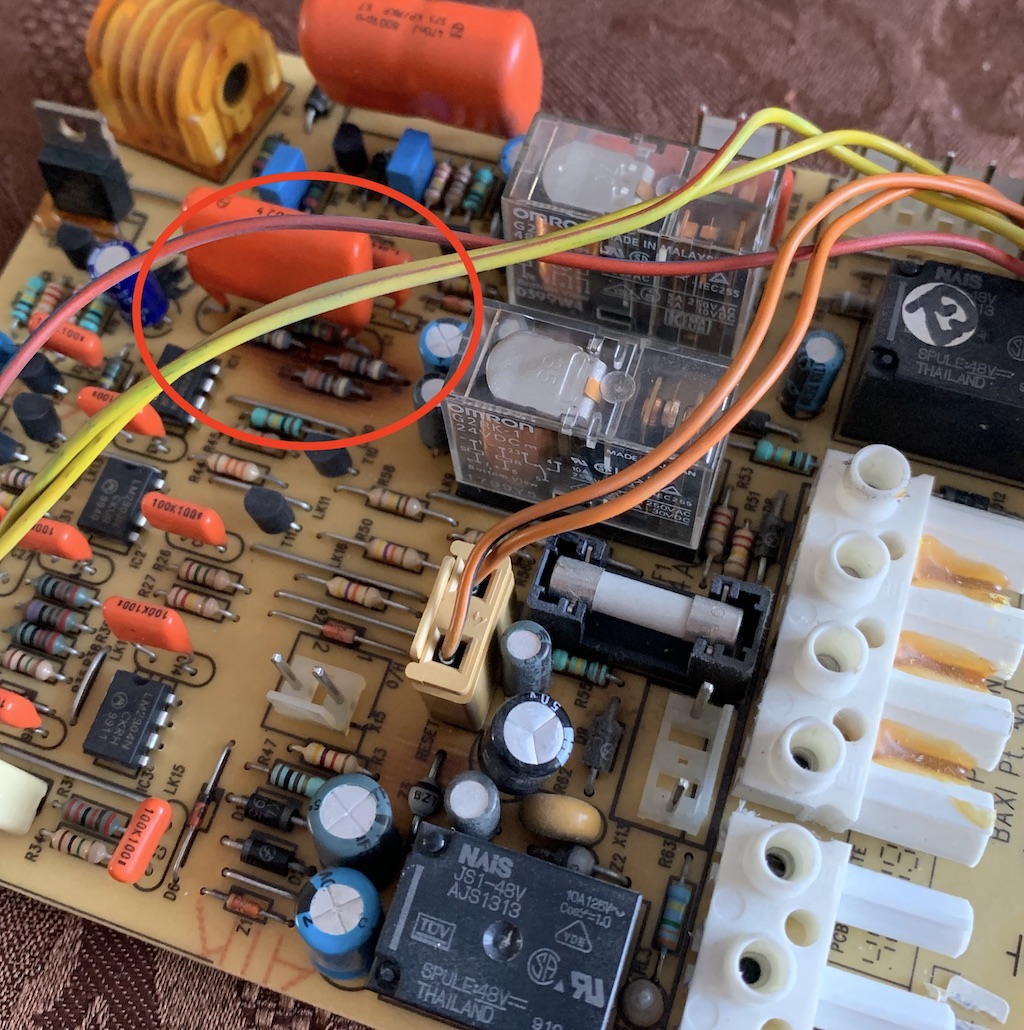 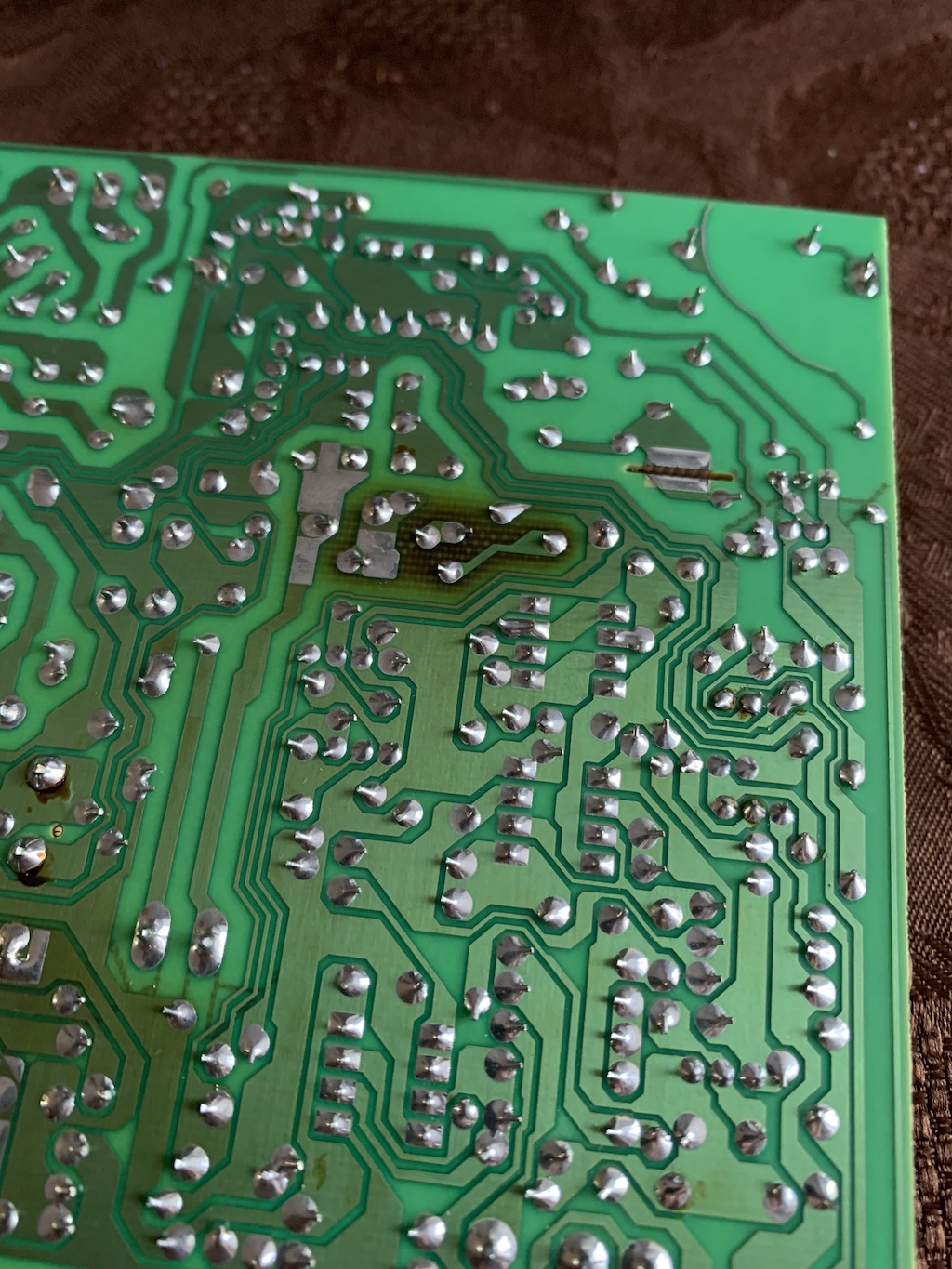 The chattering relay is quite common, with this boiler but they often still continue to work. (I have a Solo 3 and the pump overrun relay has been chattering on and off for ages) However the burn marks on your PCB show that it is ready for replacement. I seem to remember that the later PCB's have had a modification to prevent this.

The boiler is obviously seeing the 'run' signal from the controls as it's starting the pump and the 'Boiler ON' light is illuminated, but you don't say whether the fan is running or not. I had the same fault that you describe (albeit without the pipes banging) which was due to the fans' pressure switch sticking and not allowing the fan to start, until the boiler had cooled down, at which point it would release itself and would fire up again. If this is the problem it's not a DIY fix because the switch is contained within a 'room sealed' part of the boiler so should only be opened by an RGI who can carry out the necessary checks to make sure it is properly sealed up again afterwards.

I'm a big fan of the Solo 3. Mine is 20 years old and apart from a new PCB and pressure switch (neither of which stopped it working completely) It's given me sterling service.

Thanks for replying, from cold when I switch power on the relays rapid buzz for a few seconds and then it will fire up as normal, fan will start, pilot light etc. But powers off shortly after and then I have only Boiler ON light, nothing else and cycling power makes no difference unless I leave it for a while.

I've ordered a new PCB anyway but trying to ascertain if that will resolve the issues or if there is something else at play here, I saw your other post concerning the air pressure switch assembly. PCB should be here Tuesday, I'll fit that and if no change will have to call upon a heating engineer I guess.
E

This morning I'm sure the pump was working, I checked and could hear it running. But I've just checked now and apart from a very feint hum I can't hear it operating. The flow pipe from the boiler does heat up in the short time it runs before all the banging and clanking begins and it shuts down. If it is the pump then replacing it is beyond me as although there are isolators above and below it's in a very awkward position with limited access. I think I'll admit defeat here and get a heating engineer in tomorrow!

stick an old towel under the pump as some water will come out, remove the large silver screw in the middle of the pump and with a heating demand see if the shaft is turning, if it is just stuck you can sometimes free it using a screwdriver

Thank you, pump shaft seems to turn fairly freely, waiting for system cool down before I can get it to fire up and see if the pump motor runs.

Ok, started boiler up from cold, water coming out of shaft but not turning, only the Feint hun from motor. Does that point to a new pump being required? House is 20 years old and the original pump died about 5yrs in so this one has been in service around 15years now.
Sponsored Links
E

griffog said:
Ok, started boiler up from cold, water coming out of shaft but not turning, only the Feint hun from motor. Does that point to a new pump being required? House is 20 years old and the original pump died about 5yrs in so this one has been in service around 15years now.
Click to expand...

If it's not spinning then then new pump time

My thanks for your input. I'll get a new pump ordered tomorrow.
E

There is an isolator valve either side of the pump. Turn them off undo the connections pump side, slide old pump out. If you get same pump should just slide in new washers and tighten. Turn both valves back on check for leaks, jobs a good un.
E

griffog said:
Thank you, pump shaft seems to turn fairly freely, waiting for system cool down before I can get it to fire up and see if the pump motor runs.
Click to expand...

Did you try what Ian said when there was a demand for heat?
They do sometimes free and start spinning again.

If only it was that easy . I replaced this one 15 years back and I could not get the connections undone no matter what I tried. Both nuts were rusted tight and thanks to the difficult access I just couldn't get enough purchase on them to free them up. That time I gave up and swapped the pump and housing over instead. I'll see if I have any more luck this time!

enjay1999 said:
Did you try what Ian said when there was a demand for heat?
They do sometimes free and start spinning again.
Click to expand...

Yes, boiler was lit and heating turned on but shaft not moving and pipework got very hot in the minute or so before it shut off again. I could turn the shaft manually without any effort.
I