Crack in render - the heat or subsidence?

I live in a Victorian terrace, standard construction - 9 inch walls with rear outrigger. We had a loft extension done 4 years ago, using timber frame and hung tile construction.

Our neighbours also just completed an extension as well. Wasn't easy to say the least - didn't see why they needed a party wall agreement and when we forced it they just broke the rules. They decided to build their extension out of brick... now this is when the fun starts. Given this is what we considered non-standard (when I spoke to building regs he said he had never heard of anyone building a Victorian loft extension from brick). They initially built on the existing walls but then they were in breach of planning because you have to be 20cm recessed from existing eaves. From what I can gather, they then inserted steel beams and laid blockwork and then facing brickwork on top of these beams - although on the gable end they build directly on the existing wall.

They then fell foul of planning again because you have to make it look like a roof, so they went to Wickes and bought garden shed roof tiles and glued them onto the facing brickwork.

They finished the work in December, and in March we noticed a crack in our render on the top right of the window. The crack was small, but its been getting bigger and bigger and now I would say its more worrying in size.

They used the council for building regs. I spoke to them at the time and asked about the additional weight given they weren't using wood frame and they said that generally speaking, foundations could take a 10% additional weight load with no issue.

Any thoughts - am I just over worrying. Could it be just the dry weather cracking our render. The render has been on the house for decades. 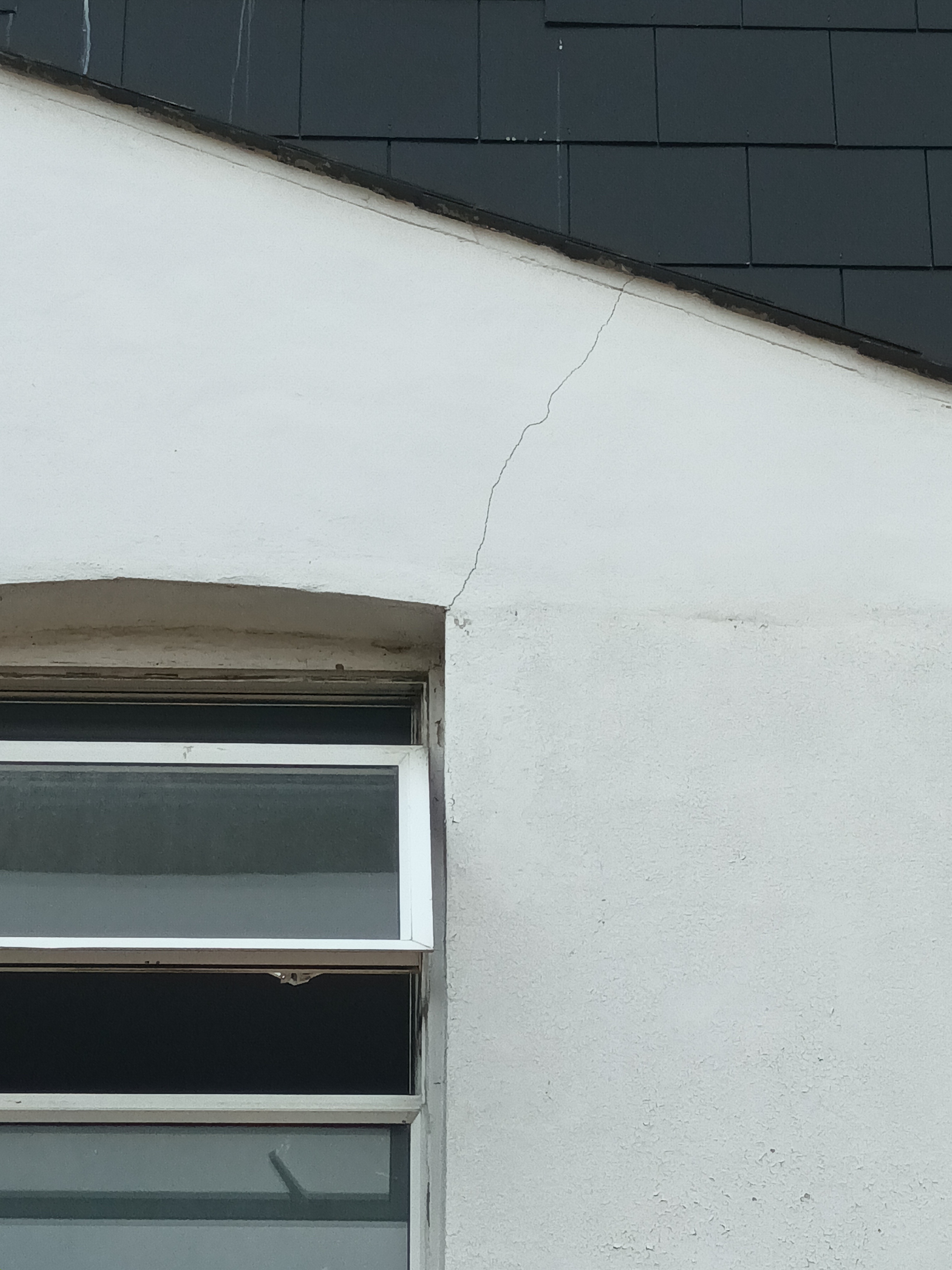 Sorry, not very helpful; but what I can say is looking out of the window of my Victorian terrace, I can see five or six properties with cracks in the render in exactly the same place!
It is a common weak spot.
No one around here seems to concerned, but it's worth keeping an eye on

They are typical movement cracks emanating from reliable weak points. Sand/cement renders are brittle and are notoriously unforgiving.
Polymer renders with netting reinforcement etc, are the future

Also , it's common to get cracks such as this in render and if not visible internally that indicates that the crack is only in the render and not in the masonry itself.
It's unlikely that the foundations of a two storey Victorian terrace would be overloaded with the addition of another storey in masonry, although the structural engineer should check the additional load. 10% is an acceptable allowance used by most BCOs, but it's just a rule of thumb - all depends on load over area. If the allowable load was exceeded it could lead to settlement which is slightly different from subsidence.
Sponsored Links

That is not a render only crack. The gable has cracked horizontally along the ceiling joist line and diagonally from the arch skew back.
M

OK - thanks. Our next course of action will be to contact the party wall surveyor and raise it with them.. (that's the only thing I can think of).

Mr_Ribble said:
OK - thanks. Our next course of action will be to contact the party wall surveyor and raise it with them.. (that's the only thing I can think of).

We have no way of knowing whether its internal as well because its on the inside of our dormer now - the only way would be to cut a hole in the ceiling of the room (the room where you can see the window)
Click to expand...

The surveyor won't be doing any further work for free, and I suspect the neighbours won't be paying him either.
M

So what happens now then.... we just cross our fingers and hope that its caused by settlement post work and that its not going to get materially worse.

Just out of interest, the work also caused water to come through the party wall in the kitchen and our party wall surveyor still hasn't got round to resolving this so we are waiting on him to do this as well. (Which leaves us questioning what the point in the whole party wall legal framework is anyway)

It's a grey area that's for sure. There is very little case law as to whether the PW Act allows for the surveyors to get involved years after the works are complete. Some legal boffs read the Act as allowing it, but others reject the idea that claims can be made or repeatedly made ad-infinitum. Likewise the mechanism for payments for the surveyors on-going work is even more vague, so the likelihood of them continuing with this work is near to zero.

But firstly you have to demonstrate that the damage is caused by the neighbours work. Again, how do you do that? Rely on the original PW surveyor (who's pay is not agreed)? Appoint your own surveyor and pass on the report? It's all a bit of a mess.

You still have redress in the civil court though, regardless.
M

Hi Woody - thanks for all your help, much appreciated.

Just to clarify, we did our extension 4 years ago. The neighbours only finished theirs in December 2021 and we saw the first crack in March or April time. 7 months on its got bigger. The PWS still hasnt resolved another issue regarding water ingress so, yes I take onboard what you say about who is going to pay for all the additional work in finding out what is causing it - but Im going to ask him.

IMHO, even if the cracking does somehow indicate structural movement, it seems unlikely that the movement is related to any downwards movement on the neighbour’s side, or the party wall.
This type of movement would most likely lead to cracking from the opposite corners of the window to what you have.
The pattern of cracking in the photos (top RH corner to bottom LH corner) indicates potential downwards movement to the RH side as we are viewing it. I assume there is no cracking elsewhere such as on the return wall?

The way the loft dormers have been built close to the gable looks like the gable is effectively now just a free standing wall in front of the loft gable which could in layman's terms just be pushed forward slightly (or has been knocked during loft work, or moved in the past) leading to the horizontal and diagonal cracking in those locations.

This is just a likely scenario, not saying that its all going to fall down.

The problem will be that it's going to be difficult to apportion the reason for this on the neighbour's dormer, when there is an identical dormer right in front of the gable which would be the more likely cause - if the cause is any of the loft work.

There is some diagonal cracking at the LH lower side of that window too, so there may be some movement in the whole upper wall or any support at first floor level. Again, not saying its falling down as movement in walls is common.

Basically it will need a detailed assessment of all the likely causes, and your PW surveyor is unlikely to be the correct person, or even qualified person to do this. Its a structural engineer's job or a surveyor with expert structural knowledge.
D

I
Vertical crack in render on extension