Gutter Replacement, looks to be awkward to do, suggestions?

I've decided to replace my gutters as they had started to look scruffy and had been damaged in places. The run also looked uneven so I hoped to rectify that as well.

I bought like for like Terrain guttering to ensure I could fit them to the existing hangers.

Due to the way the top rafter brackets have been installed they are hard against the render making it difficult to get anything behind the bracket to stop the nut turning, in the end I drilled the first one out. The thread behind the nut was pretty corroded so I'm doubtful it would have unscrewed easily anyway.

Removing the rest will be a real pain, but I'm thinking more on reinstallation, might be very tricky getting a nut behind the bracket to bolt the new gutter bracket on.

I did think I could fit a 20mm fascia board, cutting the exposed part of the old hangers off and then screwing my brackets to that. This would only give me a 25-30mm tile overhang which seem too little from what I've read?

Any suggestions on how best to proceed?

Here are a couple of pictures to show what I mean, green line is the top rafter hanger

What about, forgetting the other brackets and using rise and fall brackets? 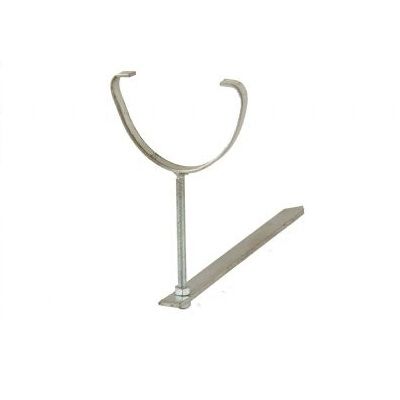 I drilled a couple of holes side by side to accommodate the bar, filled with ployester resin, and hammer in (quickly)!
They set rock solid... also will be easier to line up... drilling flat brackets onto render is a pain.

What about slipping those eaves sheets under the tiles?
M

Mr Chibs said:
What about, forgetting the other brackets and using rise and fall brackets?
Click to expand...

Good suggestion, gutters are at bungalow height and brown though, so they would be quite visible I think, I've also already bought all my new brackets.


Ian H said:
What about slipping those eaves sheets under the tiles?
Click to expand...

Not sure what you mean?


Managed to remove most of the brackets by just unscrewing. It looks like they rendered after the gutters were fitted as the render covers some of the hangers. There is no way to re-use them without chipping out some render to get access to hold the bolt in place.

A lot of the hangers were causing the gutter to angle back towards the house as well.

If I plug and screw the new brackets into the render I'll still see the old hangers, I could cut them off, but then I'll be left with visible bits of wall with scruffy render, not acceptable when I'm trying to smarten up the property.

Looks like my best option is to cut off the hangers, fit a section of fascia board to the wall as a cover up, then fit the brackets through that into the wall.

Going to use 12mm redwood as anything thicker will push the gutter out too far I think. I would guess you would want the centre of the guttering to meet edge of the roof tile, is that your query.

If you are screwing a 12mm board onto your render, it won't sit nicely flush, so you will probably be 15mm+ out from the wall.
Could you not hammer off the chippings where you want to put your new brackets? at least it would be flat(ish) and with good length screws etc, should make good contact.
M

I guess my query is vague, just sharing a problem while I think of the best way to finish the job without making it a bodge.

After further thought I think I'll cut off the existing rafter brackets, flatten off the render and make good with some mortar, then fix the new brackets on top of that patch.