Levelling a 30mm Floor Gap due to settlement

Afternoon, currently in a house renovation project and in certain areas the downstairs floor has a 30mm gap in some areas of where the skirting board is to the floor level.

At first we knew it could be a multitude of things but we just had a pretty nice guy come over who specialises in groundwork and he drilled the hole, looked through the endoscopic camera and confirmed it was just normal settlement over time and nothing sinister or out of the ordinary to worry about.

He told us about a multitude of ways we can get the floor back to level and even told us an option to do ourselves or what would be cheaper than his option. His best option was to resin-inject the ground to then bring it back up level, i believe it is like injecting that material so that it hardens and expands to the point where you are happy.

The house is in the 1970s so he said that settlement in this case should be fixed at where it is right now, so the house should not really move/sink much further, if at all. His resin method would cost in the region of a few thousand pounds.

He also said that if we didnt want to do that we could ourselves or to find someone to pour a new layer/level of concrete over the existing flooring to bring it back up to level. Which is an option that we are thinking of but just trying to guesstimate the overall cost difference as I guess his resin method would just negate any further settlement issue and futureproof it, whereas if we concrete to level ourselves then its a job that might last forever and be totally fine and save us thousands of pounds, also the option that if there were any future issues we could always call him out to do the resin.

So my question is regarding my workings out as to what the cost differential might be.

currently the floor is parquet flooring which is over the existing slab, the last owners just put some underlay and carpet down in order to make it look level:

do i have to take up the parquet flooring which would then obviously create a wider gap, which to be honest i am not too bothered about as long as it is getting done properly, but if can be avoided then dont mind concreting over also.

and because its already essentially going over an existing concrete floor, do you then have to start with all the initial steps of hardcore, sand, dpm, cement etc or might it just be a case of pouring extra cement over the existing cement layer. Also excuse me if i sound really stupid by asking but i dont really know much about this type of subject so im just guessing all the variables until maybe a professional opinion can be provided.

Either way if it is the concrete option i most likely would be hiring someone to do it because its something that i want done properly, but I also want to know as much as i can in how it should be done so that when i have the conversations with the tradesmen i can give my 2 cents if it sounds like it would solve my issue etc

Thanks in advance for any advice given
Sponsored Links
N

Just looked further and i wasnt aware that certain types of screed can go upto 40mm in thickness. i always assumed it was just to form a top layer of about 10mm or less. and that they can also go straight over Parquet flooring (according to this product): 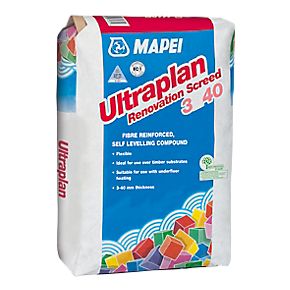 so if my levelling required is around 25 sqm at 30mm (30mm is the deepest, there are some parts that are only 15mm, which should mean less required)

i would buy 5 bags to cover 30sqm at 3mm depth, and then just multiply that number by 10 in order to get the same sqm but at 30mm depth.

Do you want to keep the parquet?
N

JobAndKnock said:
Do you want to keep the parquet?
Click to expand...

No we dont, if it was the herringbone type we probably would and reclaim it but its the inlaid parquet (squre block style) which my wife isnt a fan of so we wouldnt look to keep it tbh.
Sponsored Links
M

DIYer and have only done it once

I did a similar lift in a 6M2 area with the same SLC. 1980s Extension where the Concrete had settled.

Bags are 25KG each. I collected 10. Used 7 and returned 3. Usually suggested to get a few extra.
I used Resin fix to fill the cracks and holes. Primed the floor with SLC Primer.
Hard work. Each Mix is 30KG.
I used my Titan SDS with a mixing Paddle in Flexi Tubs. You would probably need a proper mixer - cheap enough.
I set a grid of Plasterboard screws in the Floor at the finished height as a guide.
It is not completely 'self-levelling' and will need to be helped around. Spiky Roller and possibly some Shoe Spikes so you can walk through it.
Ended up with a few small bumps and dips. Bumps can be scraped. Dips I used Mapei 1210 to fill.

A bit stressful but all OK in the end. Floor not mill pond flat but within spec (2mm/1M) for the Flooring I put down.

Some SLC you can add aggregate like Pea Gravel to save on SLC costs - Research. Not all SLCs and needs to be the right aggregate.

Top Tip: Don't rinse your Tools and Buckets into the Drain. It will set. Don't ask how I know that!

N
Do i screed to bring the floor level back up?