My DIY house refurb. Half complete,

We now had a fantastic flow rate and pressure, over 40LPM straight out of the 32mm pipe.

With this I order a boiler. I went for an unvented hot water tank and decided to mount it in the cellar. With all the pipework in place I started to ring plumbers to come and connect it. You need a ticket for "G3" (if I remember the code correctly)
After speaking to about 50. I gathered a lot of plumbers up north don't like unvented cylinders, (the ones that didn't have the ticket), and the ones that did/could told me it can't go in the cellar and they're booked up for months.
I started to read again, and called the council. I also watched a "Myth Busters" and saw one fly through a house roof!
Height was a restriction so I had to have a custom cylinder made (from memory). I spoke to a few manufacturers and the most helpful were a company called Tempest. Who made me a 400l tank with a tripple coil for rapid reheat (something like 16 minutes at 30kw)
Getting it into the cellar was a nightmare. I had to remove the consumer unit, and the stop tap for the 32mm pipe I had just fitted!
But it was in.

I still had the issue of having nowhere for the Temp and pressure discharge pipes to go. I researched and found a company that made a pump. But it was £500. As you have probably guessed I don't mind spending money if its needed. But where I can, I will always try to save.
I called the company and asked what tests it has passed, if it was certified in any way, they were a little cagey and the answer was simply no.
So I made my own. I order a pump that had a brass impeller and was good for the flow and temperature that the cylinder company recommend. I welded a large sump at work, installed a float switch (200 degree certified) and fitted the pump. It cost me around £200, and is built to last. (it should last) as its never actually been used, and never should unless there is an issue. (sorry no pictures again, I can grab some if anybody is interested)

Here is the cylinder, with the cold water supply connected, 28mm copper, and the balanced supply. 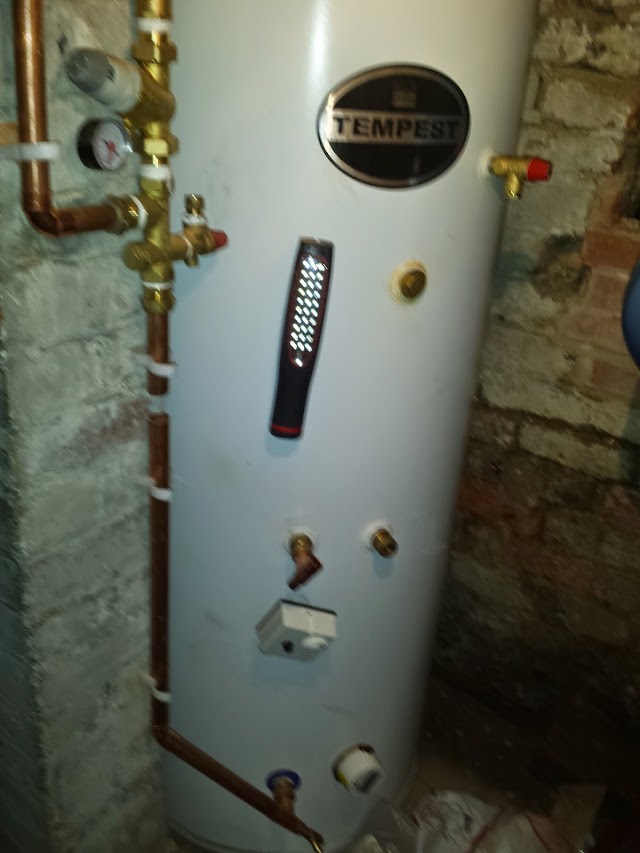 Here is the cylinder with D1 and D2 connected, the coil flow and return. Valve etc etc. 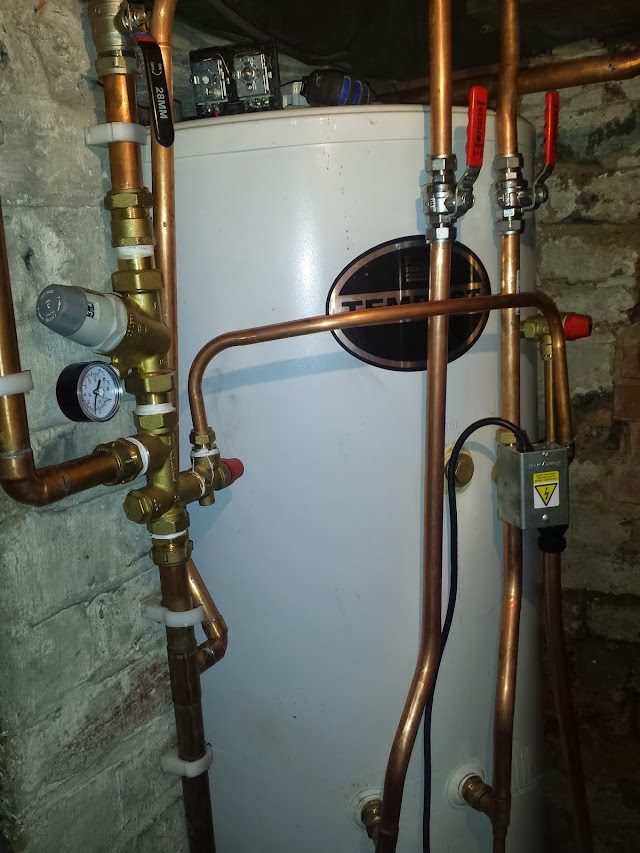 Expansion vessel fitted, you will also notice I put drain taps on the flow and return, as well as valves, so I can isolate the cylinder and drain just a small part of the CH system should I need to perform any maintenance. 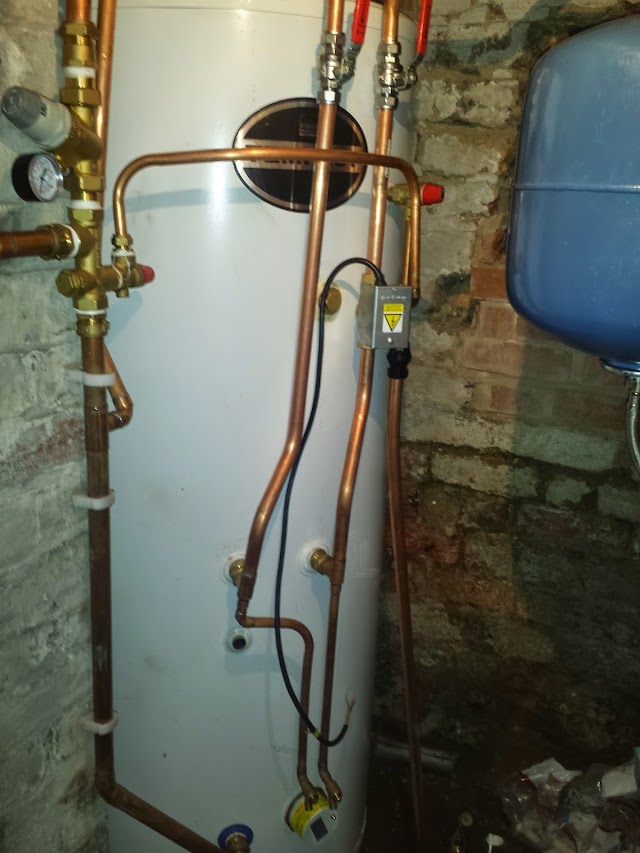 We still had the old combi fitted, but not connected to the new cylinder. I ran the cylinder off the immersion for a couple of weeks, while I mounted the new boiler in the new location in the kitchen.

I decided to go for a Valiant boiler, (we had one before and it was excellent) I cannot remember the model number. But it was a 38kw (from memory) model. I was worried as my total heating load was over 45kw with the hot water cylinder. I didn't want the heating to go cold when it was warming. However this has never been an issue, infact the boiler hardly ever runs at full load.

Boiler temporary mounted to see where to cut the plasterboard and flue.

I had a plumber come out some months previous who ran me a 28mm gas pipe from the front of the house (in the cellar) to where the boiler was going to be and capped off.
I mounted the boiler and ran all the pipework ready to be connected, connecting all the water side myself. 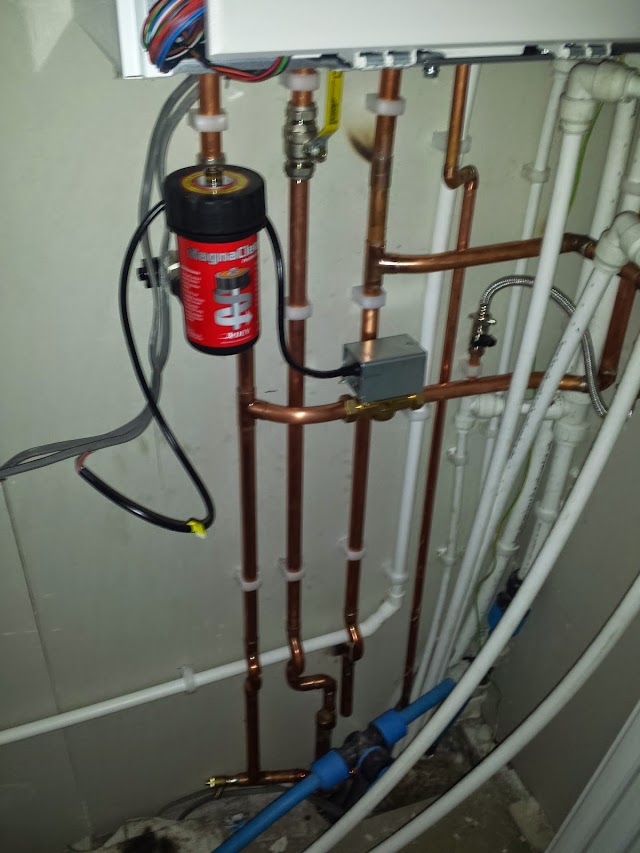 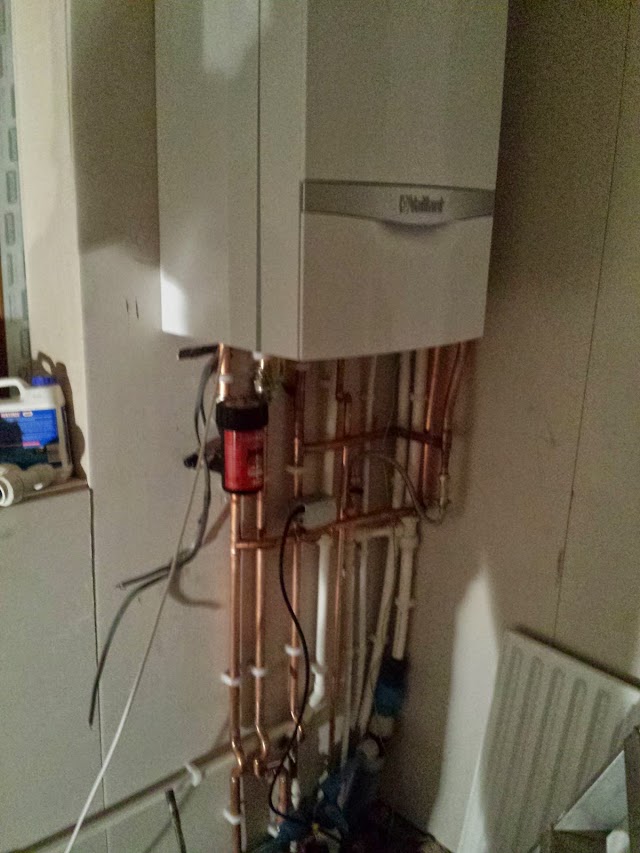 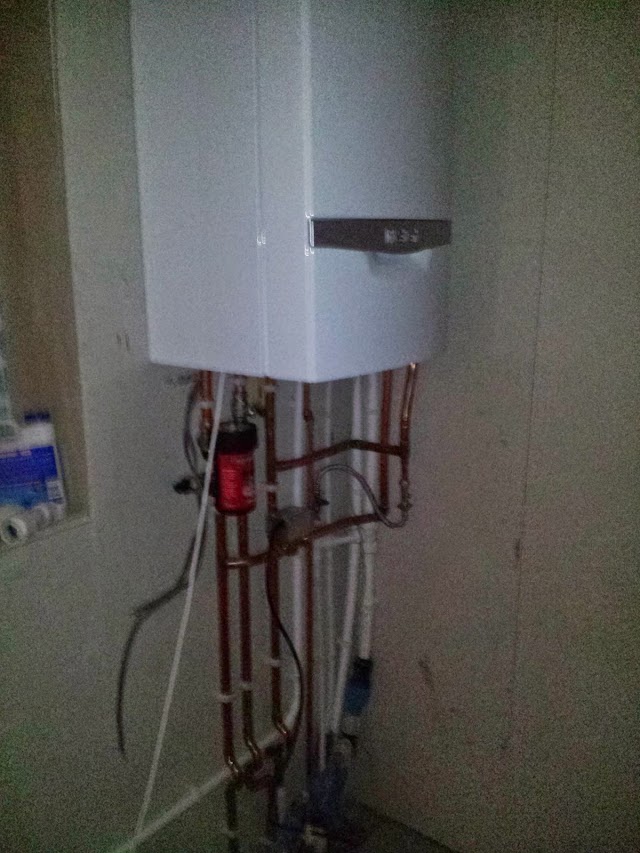 Around this time I had an issue with my phone, so have lost most of the pictures. The memory card died so I only have the odd picture.
Footings were going in at the front 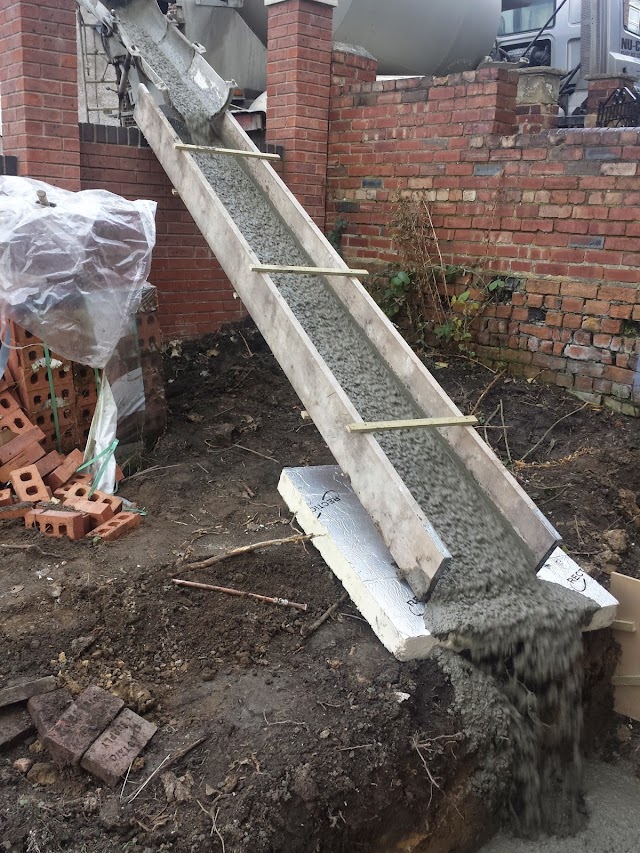 The back still nowhere near finished. This was the 28th of November and i'd promised to be done for Xmas.
First I installed ceiling speakers. (I think they are Kef but cannot remember) 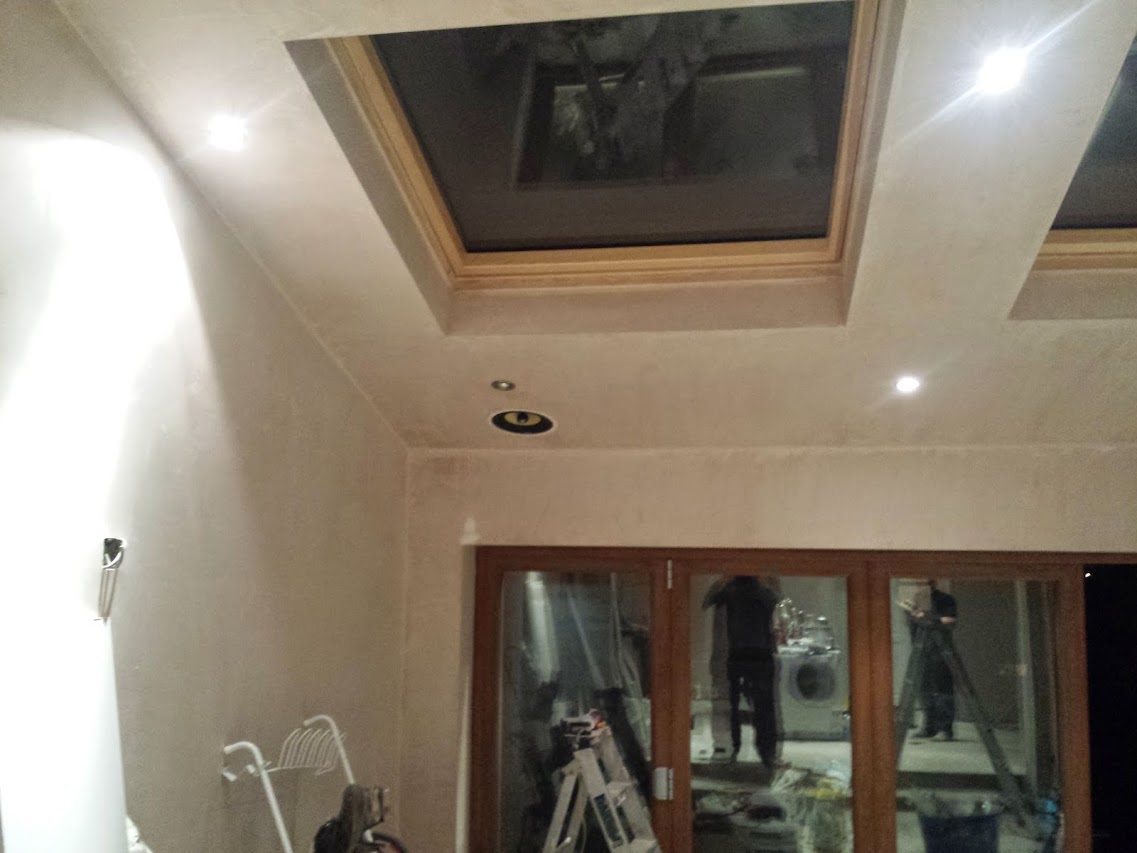 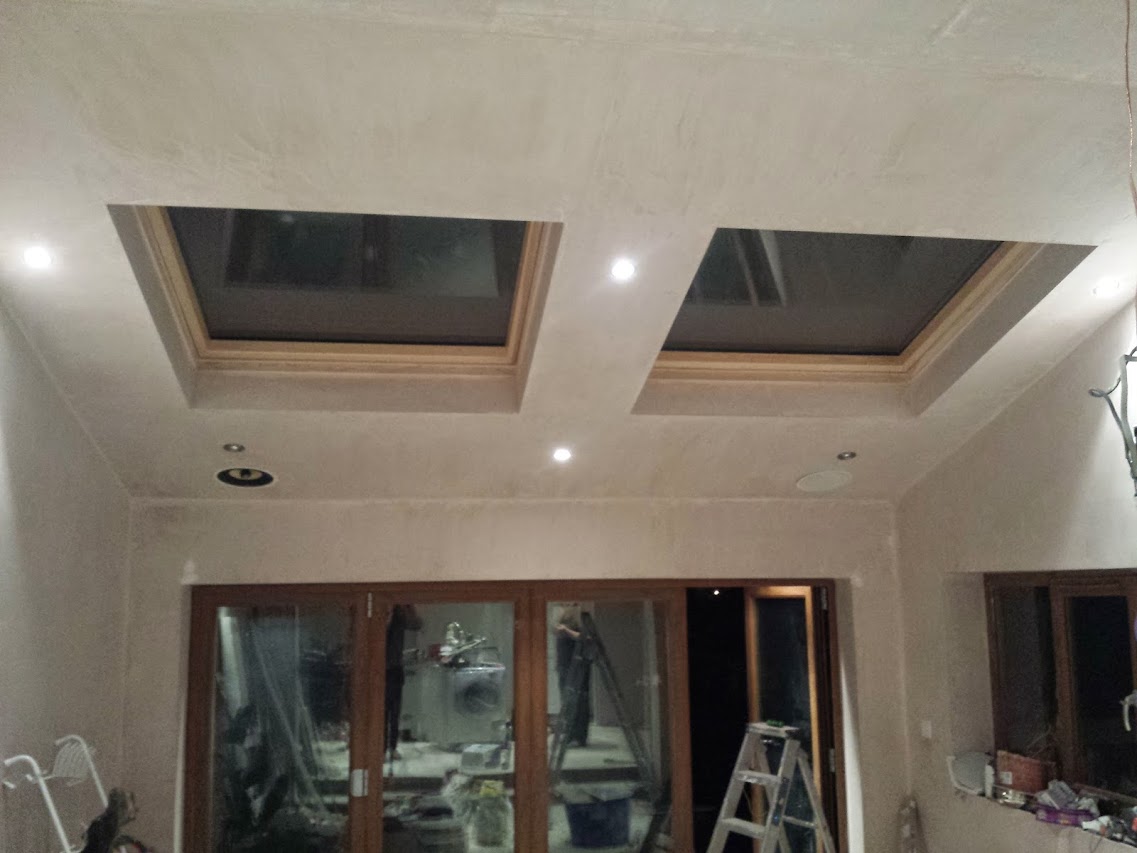 The top speakers are motorised, they were certainly from Kef. 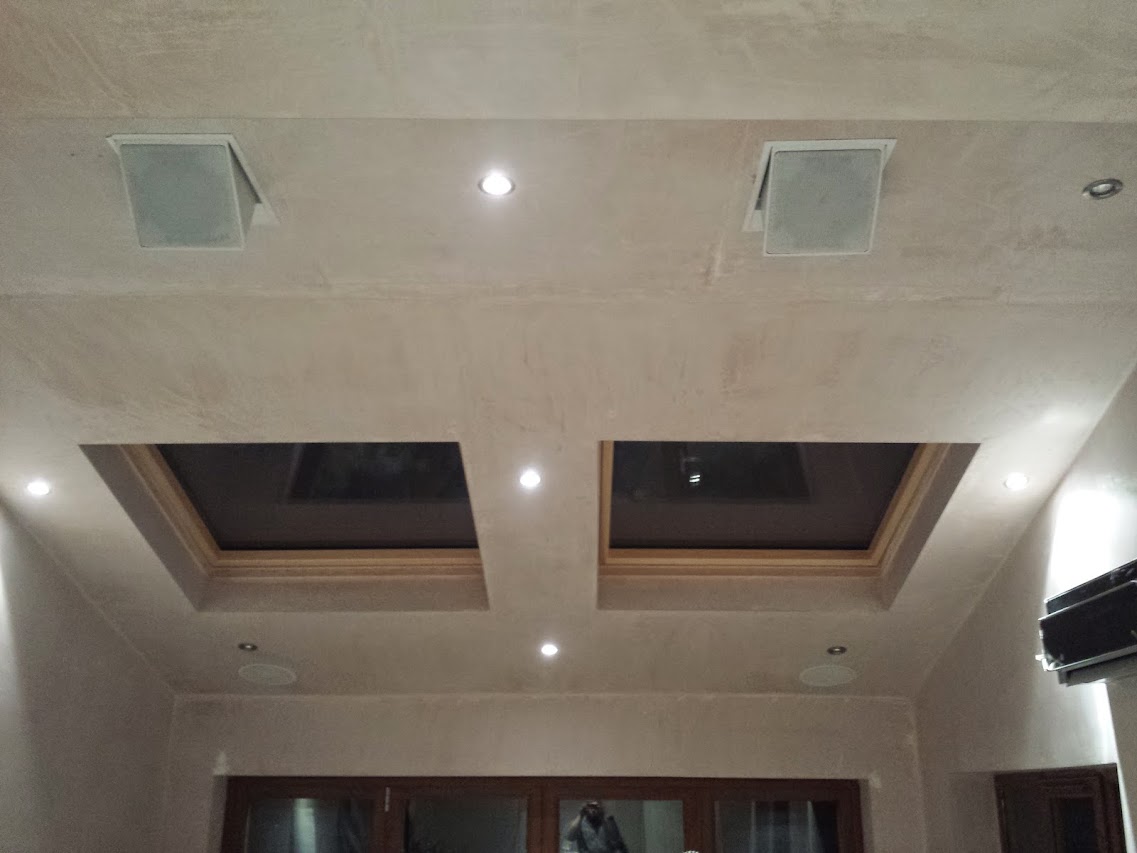 In the run upto Xmas a lot went on, I did manage to get everything completed. I took a week off work, and finished 11 o'clock on Christmas Eve!.

I haven't got any pictures other than current ones, but it hasn't changed since then.
Sponsored Links
R 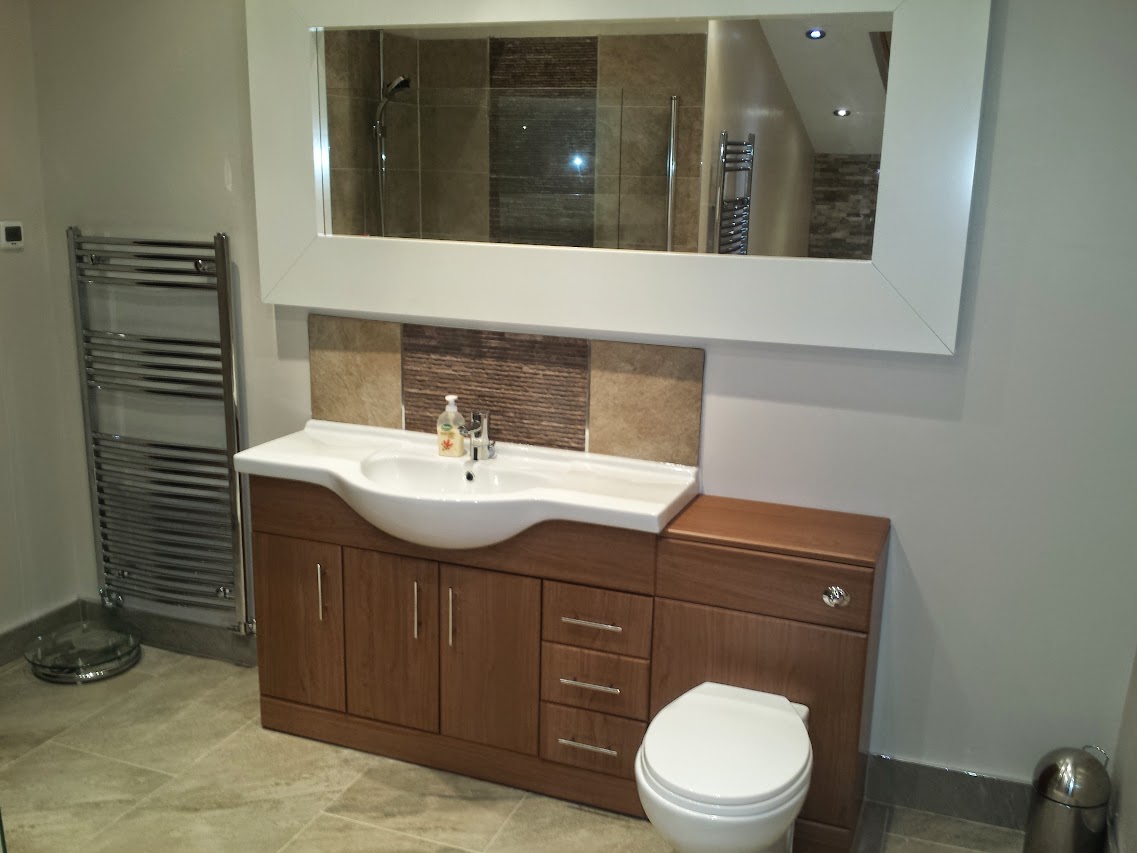 We went for a door on the shower.
Also we have the large head and a wall mounted "flip" shower or something from Mira. Altogether we get 35lpm flow rate from both showers. This causes an issue for the "high flow" (or not) waste.
You simply have to turn one of the 2 down slightly. 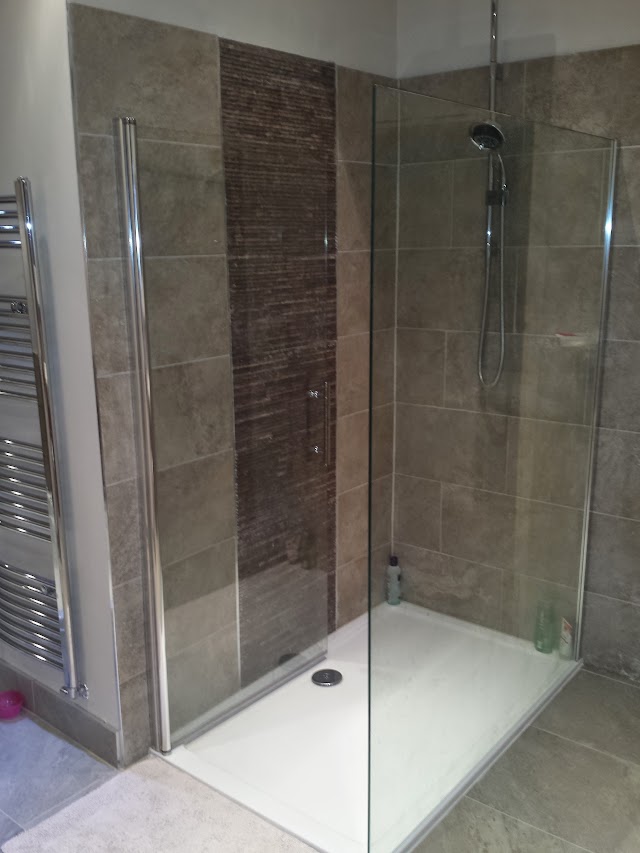 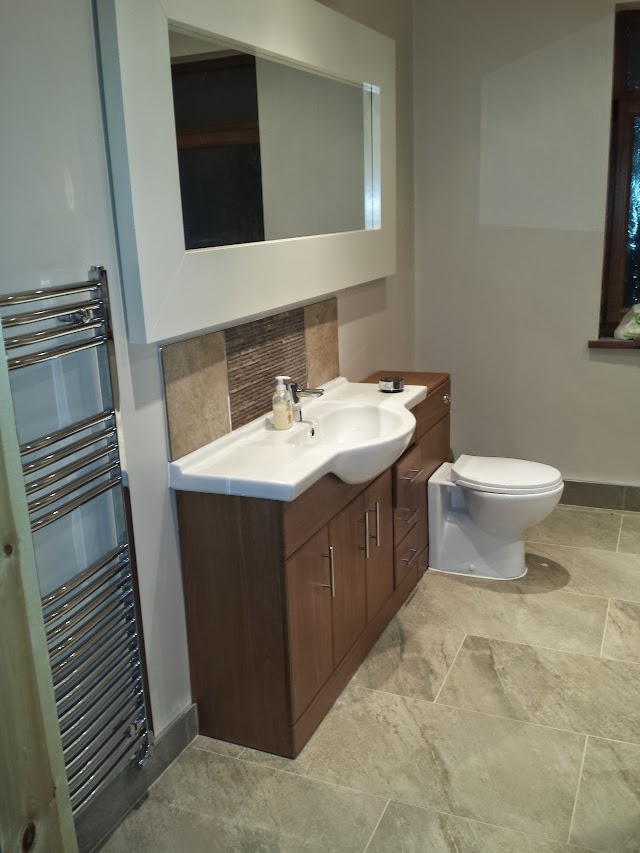 Ignore the clutter, this was when I was sealing the bath 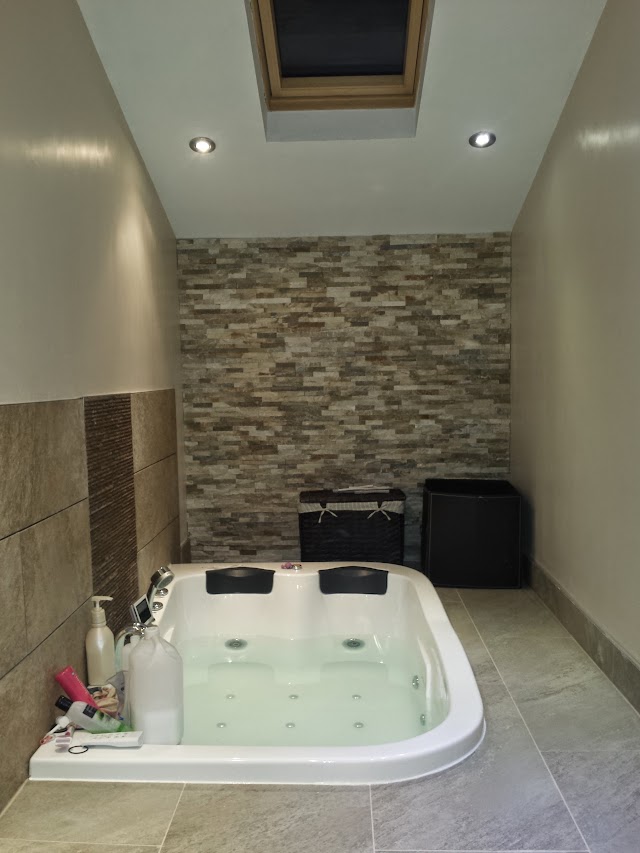 As said, I lost all the progress pics of the kitchen. I did everything apart from cut the granite. Getting the approx 300kg slab in wasn't easy!
The pictures aren't great but you get the idea.
This is a boiling water tap. Awesome invention, looking into the utility area. 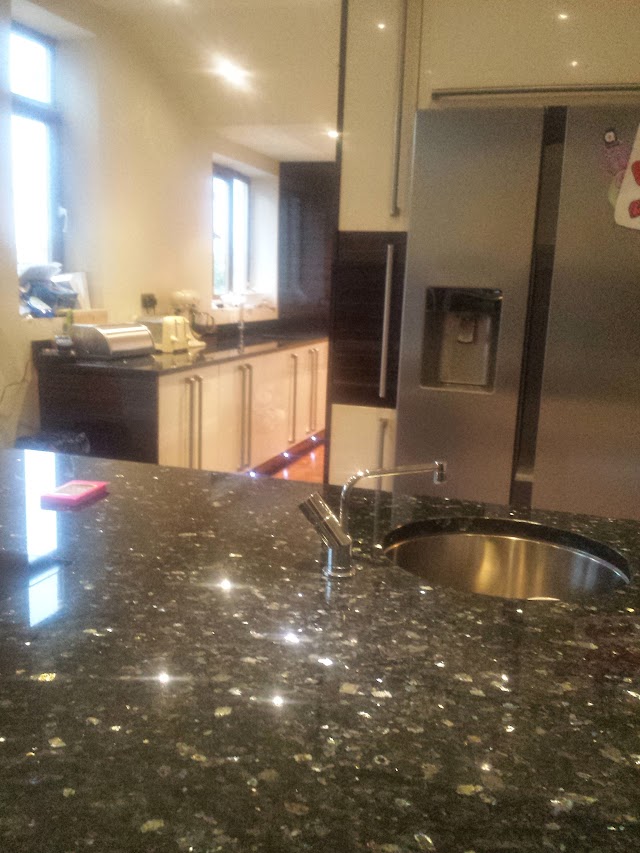 Looking into the kitchen from dining area. Most of the doors are custom, the end panel also, so it goes into the steps. 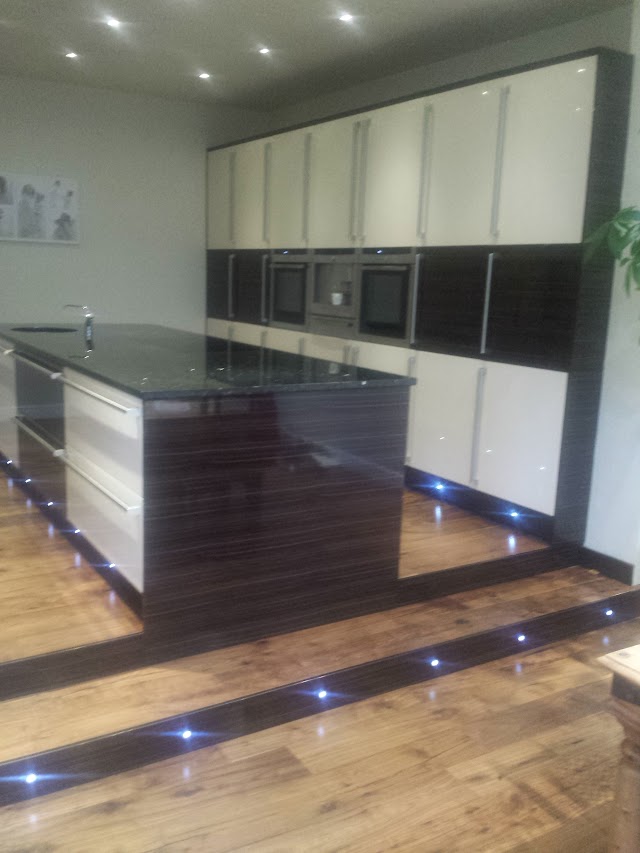 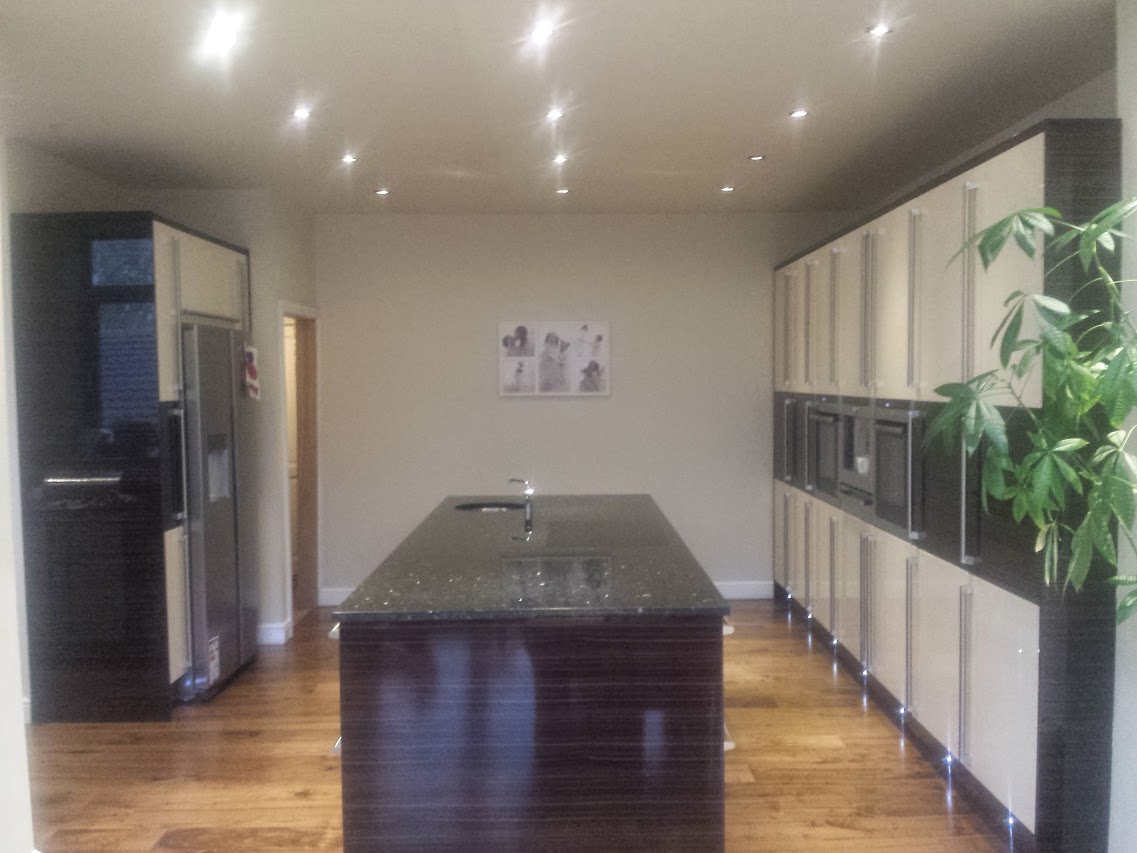 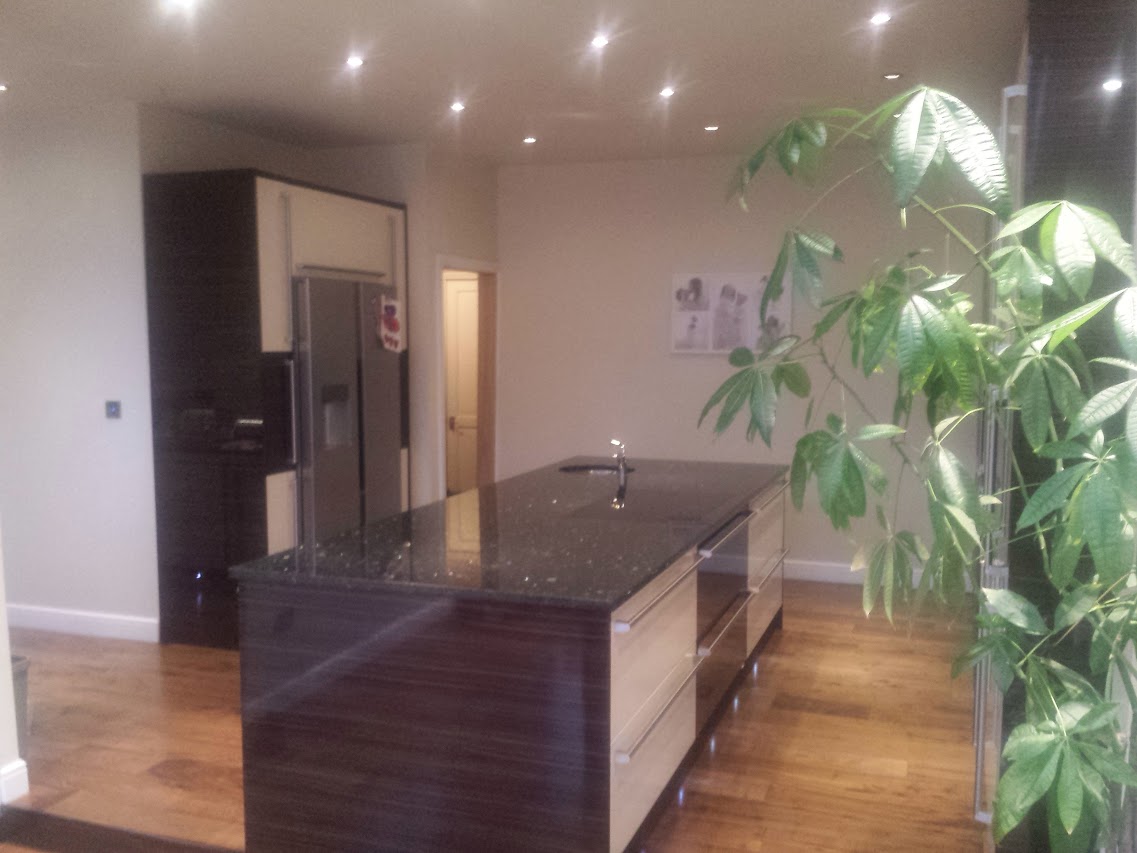 Love it all Especially the sunken bath, that is very clever.
Sponsored Links

Excellent work buddy and also living there too. Your missus must have been very understanding!
D