Hi All,
I hope you are well.
To cut to the chase. I have a roof with old school ridge tiles on the part wall that needs fixing before it starts raining properly.

I talked to the neighbour and I think we should be OK to proceed with the repair. It is not leaking on his side.
We won't be replacing roofs only repair it. I think considering he is a pensioner, it's a relatively short notice I do 60/40 split of the costs.

The funny thing is I have two local roofers who I wanted to chose from as they are the most responsive of all BUT one of them wants to fix the ridge tiles while the other insists on installing the secret gutter but I am sure during the inspection he suggested otherwise - a less invasive job, fixing the ridge tiles rather than a secret gutter so he must have changed his mind in the last 2 weeks.

I dealt with at least 12 roofers, 4 came over and 3 other gave me quotes based on the images.

The man who wants to fix the ridge tiles and use some Belgian tech in place of the mortar that apparently lasts much longer showed me that fixing a secret gutter if the roof is not replaced at the same time leaves a mess because they cannot match the tiles exactly in terms of colour and he showed me an example on a nearby roof. He also suggested to install some loft ventilation tiles.

The other gent told me that ridge tiles are pretty much illegal these days and this should be phased out. He also said that whatever is to do with ridge tiles won't last 4 years as frost will crack it open.

To be frank both sound professional and the man who suggested fixing the ridge tiles has twice as much good reviews. Both quotes are pretty much the same in the region of £1000-1200. I want to recomission my chimney for a log burner so they quote me extra ~£600 for that but this is a separate job that I want to factor in while they fix the chimney which makes a perfect sense and since they need a saddle scaffolding for work on the cowl they will do a better job on the chimney.

What do you think? What makes more sense? Firstly it's not illegal.
I'm guessing yours is the plain tile side and the older gent is to the right with double roman tiles ???
S

datarebal said:
Firstly it's not illegal.
I'm guessing yours is the plain tile side and the older gent is to the right with double roman tiles ???
Click to expand...

Mine is on the right side, neighbour's is on the left (slate). I think mine was done after his years ago but there was no consultation between the neighbour and the HA who owned it, the housing contractor came and put the whole thing down.
D

Ok where is yours leaking low down near the outside wall ?
Sponsored Links
S

datarebal said:
Ok where is yours leaking low down near the outside wall ?
Click to expand...

it is leaking in two places
1. chimney stack - cracked capping
2. ridge tiles - is leaking low down, I would say 2nd, 3rd or 4th ridge tile from the bottom, the water penetrates onto the part wall and into my loft (I can see black leak marks on the bricks) and then down onto ceiling in my room, I would say about 70cm from the gutter.

The HA didn't ask for any permission at the time so as you can see they put the ridge tiles off centre. I reckon water from neighbour's roof flows under the ridge and on my side.
F

I think the first place to look is the missing plain tiles on LH roof. There is one, 3 tiles in about half way up, and 1one a bit higher next to ridge

I deal with leaks all the time and have never really found a ridge to blame.
Last edited: 5 Aug 2022

I'm not a roofer, but I suspect your idea that the water is flowing off his clay tiles under the ridge is correct - you have a raise tile section under the ridge forming a gutter. I can't see how you would ever seal those clay tiles just plonking a ridge on top. Personally, I think I would go down the bonding gutter route as this is what they are for. Yes, you will see some colour differences between old and new at first, but that will fade.

FWIW, why don't people just use exactly the same roof covering as the neighbour when replacing - it solves a load of hassles.
F

mrrusty said:
FWIW, why don't people just use exactly the same roof covering as the neighbour when replacing - it solves a load of hassles.
Click to expand...

My other, almost full time, job is repairing gutters.

On terraced houses the minute someone decides on a different type of gutter there are problems.

Tbh I blame the installers.

The worst one I dealt with now has 6 different components at a joint due to different types of gutter being used. I've not came across issues with different roofs but am sure you have a point 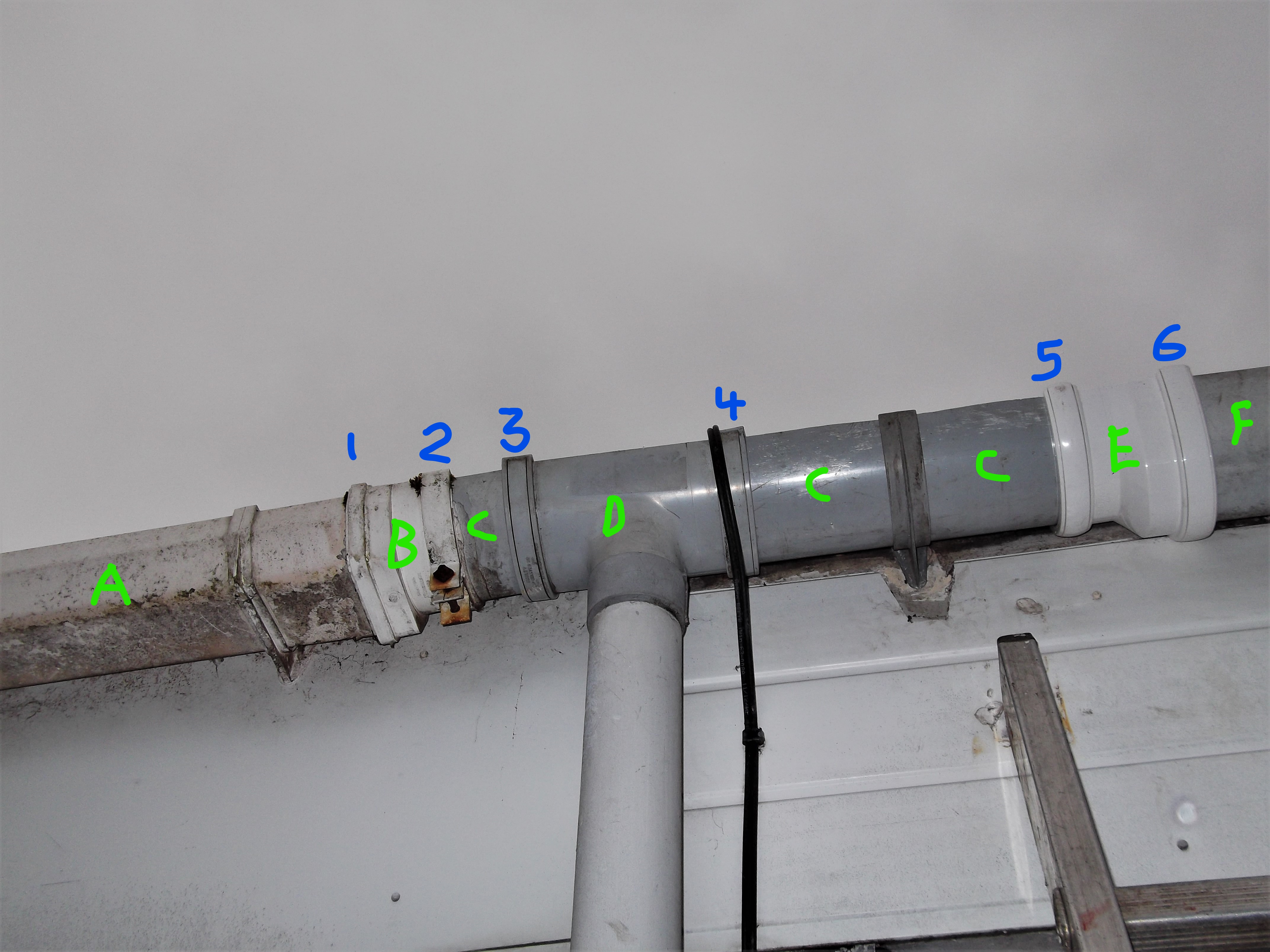 On terraced houses the minute someone decides on a different type of gutter there are problems.

Tbh I blame the installers.

The worst one I dealt with now has 6 different components at a joint due to different types of gutter being used. I've not came across issues with different roofs but am sure you have a point

that's a masterpiece
Imagine this man constructing an aqueduct!
S

foy9999 said:
I think the first place to look is the missing plain tiles on LH roof. There is one, 3 tiles in about half way up, and 1one a bit higher next to ridge

I deal with leaks all the time and have never really found a ridge to blame.
Click to expand...

Do you mean that water gets via the missing tile on his side then somehow makes its way the party wall (over his felt) and overflows on my side or on both sides? Do you mean that this happens under the ridge tiles kind of bypassing it?
The neighbour does not care or is ignorant, I had no chance to see how the party wall, things look from his loft.
But on my side it looks like that: I spent about 2 weeks to sort out the fireplace before we can move on to the roof repair.
My neighbour apart from contributing to the chimney repair as he saw the drone picture that it needs proper recapping (would cost £200 each) he is not interested into secret gutter work which basically is more money.

I have a number of quotes and it is kind of a dilemma because installing a secret gutter is the best option BUT it is also quite disruptive and if the neighbour does not contribute I don't want any complaints later and pay for additional call outs if there are some leaks on his side. I don't want his slate to be touched and I think that is how the housing association did it last time just built a ridge tiles a bit off the boundary.
People have different priorities and it's hard to agree on jobs like that.

I am going to fix the ridge tiles.
Fixing the chimney £400 and the ridge tiles on one side £800.
Secret gutter work + chimney ranges between £1500-1600 so more expensive
But I have one quote for £1850 in total but for secret gutter ON BOTH SIDES (North and South) and chimney work which in my opinion is the best option but I won't be spending that much just to prove how good neighbour I am and I would still have to take a bigger risk of complaints due to secret gutter work being more disruptive to the existing tiling.

It's a bit of a shame but what can I do?

Whoever decided to install a different tile is ultimately to blame!
S

catlad said:
Whoever decided to install a different tile is ultimately to blame!
Click to expand...

this is not uncommon on roofs in this area to have tiles and slate
and people install secret gutters even if the tiles are exactly the same, they don't merge roofs on semi-detached.

Would a housing association do this to save money and to jeopardise the party wall?

As far as I know it was part of the big project - the insulation around the house and the roof.
I think they just don't want any extra work and problems related to the neighbour's roof regardless if they go for different tiles or the same (slate) a secret gutter has to be put in place. I have not seen a roof of any of these semi-detached houses to be without a ridge or a secret gutter.
C

I wonder why they didn't put them in when the house was built?
Answer! Because it would be a dumb idea!
D