'Beauty with antimatter bottom' created out of pure energy

Physicists at the Large Hadron Collider (LHC), the most powerful particle punisher ever assembled by
the human race, say that experiments there are going well. In particular, they have managed to
create out of pure energy a thing which they describe as a "beauty" featuring an antimatter bottom. 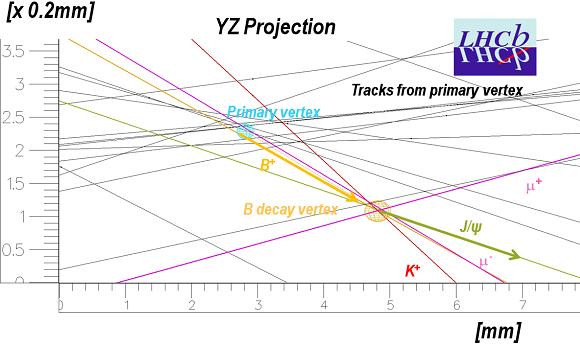 The unbelievably tiny creation was picked up this week by assiduous boffins trawling through some
ten million pics taken by the vast LHCb experiment situated deep underground on the subterranean
superchilled superconducting supermagnet proton-ring circuit of the Collider, just outside Geneva.

According to the LHCb scientists:

LHCb has reconstructed its first Beauty Particle! The Beauty Particle (called B+) is composed
of an anti-quark b (that has a very short lifetime of 1.5 thousandth of a nanosecond!) and a quark u.

The quark b is known in some circles as a "bottom" quark, so this is plainly an anti-bottom.*

It seems that the B+ beauty was produced by the head-on collision of two protons travelling at light
speed, rammed into one another by the crossing of the LHC's twin opposing proton ring beams within
the LHCb detecto-cavern complex.

If we're following the scientists' explanation correctly*, the newly created B+ actually had about five
times as much mass as the two protons which had crashed into one another to call it into being: in effect,
most of the beauty sprang out of nowhere during the collision as the outrageous energies carried by the
LHC's colliding particle beams were converted into mass, in a reversal of the process which turns
the Sun's matter into sunlight.

"Yes, we can create mass from energy using the famous Einstein formula E=mc2," report the LHCb
boffins, with pardonable smugness.

They proved this by working out that the beauty with the antimatter bottom, after travelling about 2
millimetres, exploded and turned into a shower of other subatomic gumble including a Kaon (which
is, as any fule kno, one of four types of meson whose strangeness is non-zero) and a thing known
as an "excited charmonium". The latter then came to bits again again, as you'd expect, into
a muon and an anti-muon.

By some process involving extremely hard sums and possibly some type of reinforced, extremely
close-fitting hat to prevent their heads exploding (we could do with one of those just writing about it)
the boffins managed to identify all of this on the mad snakes' wedding of particle tracks pictured
above and add up how much the original antibottomed beauty had weighed (5.32 Giga-electron-Volts,
in case you're wondering) pleasingly confirming that they had indeed summoned matter - and
antimatter - into existence using only French and Swiss grid electricity.

Quite apart from being good clean fun, boffins hope that this sort of business will solve the
so-called "puzzling antimatter" problem, namely: where is all the antimatter?

According to physics, antimatter and regular stuff should have been created in equal amounts at the
Big Bang, yet somehow we've managed to arrive at a universe full of regular-flavour matter and
pretty much no antimatter at all.

According to CERN boffins this means that pretty much the whole of physics is wrong, which seems
to be pretty much normal for physics:

Since the disappearance of primordial antimatter cannot be explained by the current Standard
Model theory, it is clear that we have to look for something new. Scientists are exploring different
avenues but, given the fact that what we observe represents only about 4% of the total energy and
matter that the Universe is made of, one can guess that part of the key to solving the antimatter
mystery could be held in the yet unknown part of the Universe.

Apparently the key to the business involves looking into something called "CP-violation", which is some
sort of deviance from normal
behaviour on the part of antibottom beauties and their relatives - thus the more of them that
can be created at the LHC, the sooner the missing 96 per cent of the universe can be tracked
down - perhaps hidden in another dimension or something.

We here on the Reg antimatter-saucy-pictures desk say: good luck to them. We're off to treat
our aching brains with some specialised tonic fluids, invaluable in cases of this sort, down at
the pub. ®

*STANDARD REG SCIENCE QUALITY WARNING: The chance that we are following this correctly is
roughly equivalent to that of a man with no arms throwing a handful of jelly through a falling
doughnut at fifty yards without touching the sides.
Sponsored Links

what the f&&&ck u got nothing better to discuss on a DIY forum good god!
J

The amount of electrickery they use to create this particle is playing havoc here at Chateau Sinfin.
No wonder my lights keep flickering, computer blows up and washing machine fails to spin.
I really wish they'd stop messing with stuff they know nothing about. They could buy their own genny from Screwfix IMHO.
L

It's OK, diane will explain it all later.
L

I thought they were repairing the LHC after it failed last time.

Who wrote that? its quite funny.
L

Steve said:
I thought they were repairing the LHC after it failed last time.
Click to expand...

its got new tyres, new exhaust, new plugs and points and a new alternator and 12 months MOT now.

Goes like wotsit off a shovel, thats why there banging particles together at higher and higher energies and making all these wierd particles that havent been seen since since the universe was

I mean, this particle was massive, it was like 5 giga electron volts. If I may use an analogy, wheras electrons are robin reliants and protons are Ford Transits, this particle was a 6 axle curtain sided articulated lorry with two trailer behind, loaded up with 100 tons of iron ore, going down the motorway at 120 MPH. It was MASSIVE!!
D

dextrous said:
Why are they telling us things that any 35 year time-served plumber already knows
Click to expand...

Which one? diane1 is to blame. She was always a 'go'er.
L

ooooooooh, that smarts...
You must log in or register to reply here.
Sponsored Links

L
Norks have the answer to humanity's greatest problem