Please note that the reason for advising you about Part P and the notification requirements in the Building Regulations is not to hide behind the law as an excuse for not giving advice.

The concern of this site is safety and the giving of good advice, and part of the latter requires telling you about the law because ignorance of it is no excuse, as they say. There has never been anybody prosecuted for not notifying, the concerns are:

If as a fully informed decision you decide to ignore the law, then that’s up to you - it’s not the job of this site to enforce the law.

But neither is it to tell you how to do things which could have implications for you without making sure that you are aware of the law.

DIY Electrical work and the law

original by Ban all Sheds

Essentially, per the 2005 legislation, the distinction is between major work, or work in what are deemed high-risk areas such as kitchens, bathrooms and gardens, and minor work such as replacing switches or adding sockets to existing circuits. (NB to those with a knowledge of the IEE Wiring Regulations, the term “minor work” is used here in its generic sense rather than the meaning defined in the Wiring Regs). However, in April 2013, changes in the Building Regulations in England (but not yet, as of July 2013, in Wales) considerably reduced the electrical works regarded as ‘major’ and therefore requiring ‘notification’ (see below).

A very important and fundamental point to note is that DIY electrical work has not been outlawed. It has been brought within the remit of the Building Regulations and cannot be carried out as freely as it was before, and in many cases cannot be carried out without involving your local council, but you may still DIY.

Major work is classed as notifiable, i.e. it must unless exempted by Regulation 9 be notified to your Local Authority’s Building Control department (LABC). How this happens depends on who does it.

If the work is carried out by an electrician who is registered with one of the organisations who administer self-certification schemes, (sometimes referred to as “Competent Person” schemes) they carry out the work and report the details to their scheme organiser, who then notify the appropriate LABC that the work has taken place, and that it has been certified by the person who carried it out as being in compliance with the Building Regulations. You may be familiar with this method of operation if you have ever had windows replaced by a FENSA member.

If the work is carried out by someone who is not registered with one of the schemes, be they an electrician or another type of tradesman (e.g. kitchen fitter) who has chosen not to register, or a DIYer, then it must be notified to LABC in advance in the same way that any building work which requires their involvement is notified in advance. And just like when you are building an extension, or converting a loft, etc, there is a fee payable to LABC to cover their activities related to checking compliance with the Building Regulations. (But see “LABC Issues” below regarding this).

The April 2013 change in the regulations in England (but not Wales) also introduced the option for someone not registered with one of the schemes to undertake ‘notifiable’ electrical work under the supervision of a ‘registered third party certifier’ who would then certify the work, and report that certification to LABC, in a similar fashion to the way in which ‘self-certified’ work is dealt with. However, such an option requires the ‘registered third party certifier’ to be appointed and involved before work starts. As of July 2013, it is not clear as to whether this option is being utilised at all, not the least because no mechanism for electricians to be ‘registered’ as ‘third-party certifiers’ seems yet to exist.

Another important point to note is that apart from a Building Inspector, nobody can certify someone else’s work as being compliant with the Building Regulations. Unless arranged by or in cooperation with LABC, a 3rd party electrical inspection is of no value in terms of complying with the law.

The 2010 version of the legislation can be found here: http://www.legislation.gov.uk/uksi/2010/2214/contents/made. It is worth making the effort to read and understand it, because there is a lot of misinformation on the Internet, some of it put out by organisations with a vested interest in pretending that DIY work is illegal, some of it by LABCs who have either misunderstood the legislation, or who are also attempting to mislead the public in order to reduce the amount of work notified to them by non-self-certifying people, some of it, surprisingly, by the DCLG themselves (The Office of the Deputy Prime Minister, predecessor to the Department for Communities and Local Government, were responsible for the legislation), and much of it on electrical advice and discussion fora like this one.


Please also note that the 2010 SI linked to above is almost, but not entirely, a complete replacement for all the previous SIs which made up the Building Regulations. For the scope of this Wiki article it does represent the consolidated position, but it may not do for other areas, e.g. Energy Performance certificates, so if those are of interest to you please carry out due diligence in following the SI trail to find out the requirements. 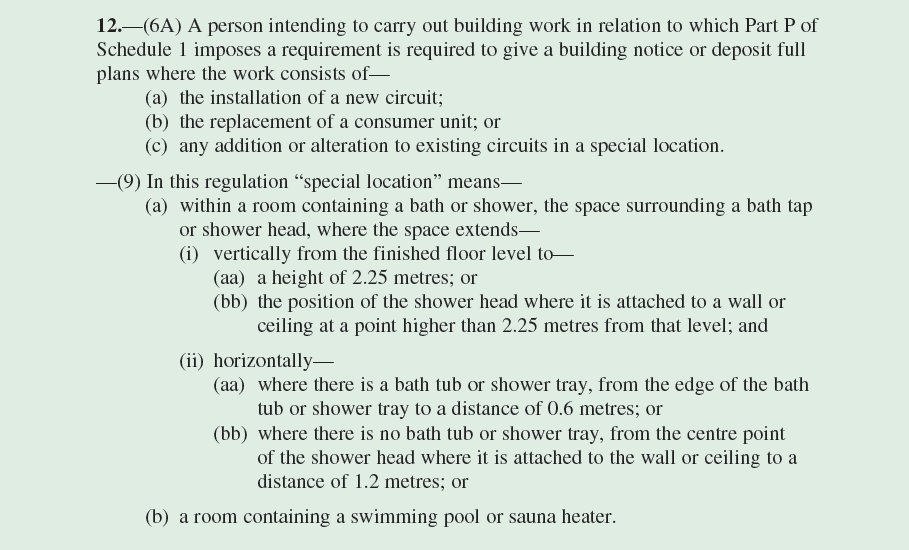 The notification requirements (described in terms of the works which do not require notification) which were in force in England prior to 6th April 2013, and which remain the rules in Wales as of July 2013 (and probably for the foreseeable future thereafter), were defined in a Schedule to the Building Regulations as follows:

2. Work which -(a) is not in a kitchen, or a special location;(b) does not involve work on a special installation; and(c) consists of -
(i) adding light fittings and switches to an existing circuit, or
(ii) adding socket outlets and fused spurs to an existing ring or radial circuit.
3. Work on -(a) telephone wiring or extra-low voltage wiring for the purposes of communications,
information technology, signalling, control and similar purposes, where the wiring is
not in a special location;(b) equipment associated with the wiring referred to in sub-paragraph (a);(c) pre-fabricated equipment sets and associated flexible leads with integral plug and
socket connections.
4. For the purposes of this Schedule -“kitchen” means a room or part of a room which contains a sink and food preparation
facilities;“self-contained” in relation to a fixed building service means consisting of a single appliance
and any associated controls which is neither connected to, nor forms part of, any other fixed
building service;“special installation” means an electric floor or ceiling heating system, an outdoor lighting or
electric power installation, an electricity generator, or an extra-low voltage lighting system
which is not a pre-assembled lighting set bearing the CE marking referred to in regulation 9 of
the Electrical Equipment (Safety) Regulations 1994(a);“special location” means a location within the limits of the relevant zones specified for a bath,
a shower, a swimming or paddling pool or a hot air sauna in the Wiring Regulations,
seventeenth edition, published by the Institution of Electrical Engineers and the British
Standards Institution as BS 7671: 2008(b).

Like any law, things can change, and you are urged to ensure that you make yourself familiar with the law as it stands now, not necessarily as it was when this document was written.

and a list of the relevant legislation can be found at

It is in the nature of the Internet for sites to change, and it may well be that today, when you are reading this, the links above no longer work, and you will have to search for the pages you want.

On the Planning Portal website there are a number of “Approved Documents”
(http://www.planningportal.gov.uk/buildingregulations/approveddocuments/). These are not definitions of the law, nor do they tell you what you must, or must not, do. Instead they give guidance on ways in which the law can be satisfied. They do point out that you are not obliged to adopt any solution contained in them if you prefer to meet the requirements in another way, but that said they are useful as they contain common sense advice and often there is no good reason not to adopt the solutions they contain.

The technical requirements laid down by Part P are remarkably simple. They are:

P1 Reasonable provision shall be made in the design and installation of electrical installations in order to protect persons operating, maintaining or altering the installations from fire or injury.

It is worth noting however that they apply to all work, not just notifiable work, no matter who does it. So a DIYer adding a socket or a fused spur to a ring final circuit must work to the same technical standards as a registered electrician doing a complete rewire.

The biggest practical issue that arises is testing. To carry out testing of electrical circuits requires expertise and equipment, neither of which are likely to possessed by the average DIYer. So although Part P allows a DIYer to replace an entire circuit cable if it is damaged, without notification, it is arguable that he could not be sure that he had done it properly unless he carried out a series of tests on it, something he would probably be unable to do.

The IEE Wiring Regulations, aka BS 7671

Surprisingly, perhaps, Part P does not alter the status of the Wiring Regulations. They are still non-statutory, and there is still no legal requirement to adhere to them in domestic installations. This is a source of great discomfort to many electricians, and some of them will jump through hoops to try and prove that they are mandatory, but the fact remains that they are not.

HOWEVER, adherence to them is a very good way of ensuring that you meet the technical requirements of Part P, and you would need a very good reason, and a very good understanding of what you were doing, to decide to not adhere to them.

As mentioned above, some LABCs are spreading misinformation, either by accident or design, about the status and acceptability of electrical work done by DIYers or other non-registered people.

1) Stating that such persons simply cannot carry out notifiable work, and that it must be done by registered electricians. The legislation referenced above makes it quite clear that this is not the case. LABCs are not allowed to refuse to process Building Notices submitted by non-registered people.

2) Stating that work carried out by a non-registered person must be inspected and tested by someone who is registered, or who they regard as qualified. Again, there is no mention of this requirement in the statutory instrument.

However they are allowed (indeed must) charge people if they choose to subcontract inspection & testing, and this might mean a charge per visit.

Where the local authority consider it necessary to engage and incur the costs of a consultant to provide specialist advice or services in relation to a particular aspect of building work those costs shall also be included in the determination referred to in paragraph (1).

As of April 1st 2010 para 1.26 of Approved Document P conflicts with actual legislation, so presumably is null and void, but is scheduled for replacement soon.

The laws in Scotland and Northern Ireland are different, and if you are affected by them then you should make the effort to find out for yourself what the legislation says.

Do not rely on other people’s interpretation of it, particularly if they have vested interests, such as being electricians, or running a registration scheme, or being a local authority after a quiet life.