The first diagram shows the traditional system which was used for many years, where the lighting circuit loops through the ceiling roses.  It builds up 1 step at a time, showing first how the circuit cable runs from one rose to the next, then how a single cable drops down to a switch, and finally how the light itself is connected between the switched live and the neutral. 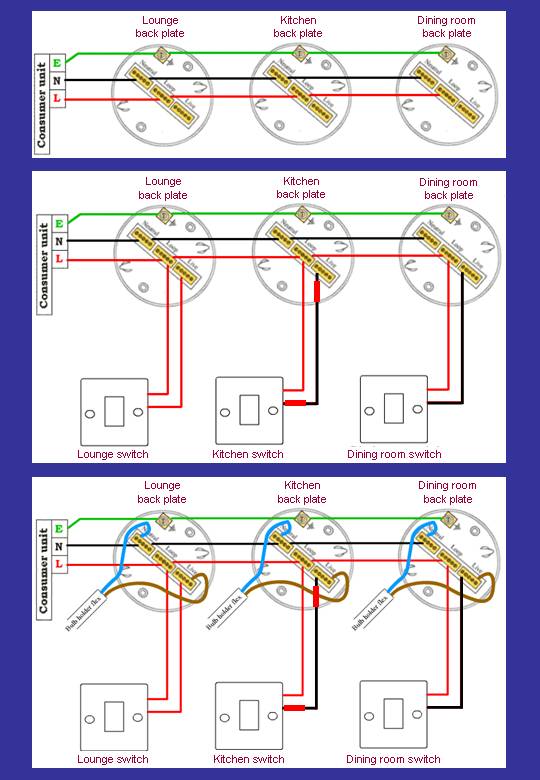 For clarity the earths in the switch drop cables and the lights are not shown.


This system is also known as “3-plate” because of the 3 terminals (not counting earth) present in the rose.


As you can see with this method a typical ceiling rose will have 3 twin & earth cables running to it, i.e. a total of 9 conductors - the circuit cable in and out and the cable to the switch.   It can look a confusing mess but as long as you make a note of which is the switched live before disconnecting anything you won’t go wrong.   It’s very important to keep track of which is the switched live because it will almost always be black (or blue), not the usual red (or brown) used for live, because normal twin and earth is red & black (or brown & blue).   If you connect all the blacks together you’ll have a dead short between L & N when you turn the switch on and things will not go well for you.


You might find a twin red (or twin brown) used, as per the LH switch, or if not you should find the black (or blue) has a red (or brown) marker on it as per the middle switch, but in reality treat those as a bonus - it’ll probably be unmarked as per the RH switch.

Looping through junction boxes instead of ceiling roses

The same basic circuit topology can also be used with junction boxes instead of ceiling roses:

An alternative circuit layout is where the loop runs through the switches, and this is becoming increasingly popular because it makes adding a new switch, or swapping a 1-gang to a 2-gang etc, for a new light easier because there’s a neutral at the switch position, which there isn’t with the traditional layout.   It also makes it easier to support a wide range of light designs, freed from the constraints of a ceiling rose, it allows lights with only L/N/E terminals to be easily fitted, it makes testing easier as that can be carried out at switch height rather than up at the celing and it means that the bulk of the connections are also not done overhead. 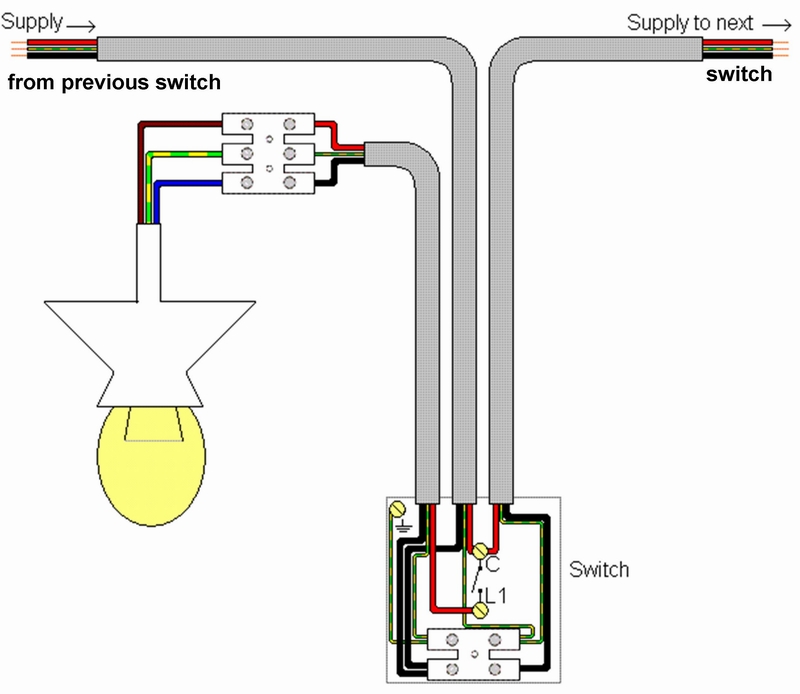 The downside is that it can get very crowded in the switch back box, particularly with multi-gang switches in 2-way or 3-way arrangements.