What a BIG hard man eh!? Hopefully there's a nice warm welcome waiting for him when he's sent down. Oops silly me, he'll probably be given round the clock security for his protection and obviously he won't be locked up for too long a time... after all, we can't be seen to be punishing big hard men like this can we?

A man who blinded his girlfriend by gouging her eyes has admitted causing grievous bodily harm with intent. 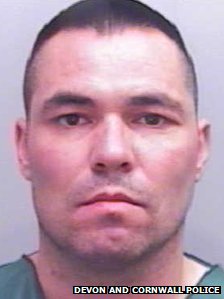 He was arrested after assaulting the 31-year-old mother of two at her house in Hayle on 20 April last year.

Jenkin, who had attacked her before, kept Ms Nash imprisoned for 12 hours after the attack, the court heard.

Although there had been violence in the couple's relationship, Ms Nash told police she thought she could change Jenkin, even admitting she had helped him get out of trouble for hurting her on previous occasions.

After the "vicious" attack in April, attempts were made to save the sight in one of Ms Nash's eyes, but they failed and she was left completely blind.

She said the attack had left her feeling "buried alive, claustrophobic and not in control of my life".

She said: "I truly feel that, when he was strangling me, he was trying to murder me.

"He has taken everything from me and robbed me of one of the most precious things in life - my sight."

She added: "I actually look forward to going to sleep because in my dreams I have sight. It's when I wake up that the truth hits home.

"Some days I just don't want to get up, but I'm determined to provide a future for my children and this is my motivation."

Her sons were aged 13 and three at the time of the attack.
'Shocking case'

Ms Nash said Jenkin blamed her after the attack.

She said: "He was saying 'it's all your fault, I'm going to get years for this'."

She added that she was glad that he had "at least taken responsibility for changing my life forever".

Det Insp Chris Strickland, of Devon and Cornwall Police, said it was the "most shocking" case he had ever dealt with.

He added that he was relieved that Ms Nash did not have to go through a court case and give evidence.

He said: "It was a premeditated, sustained and vicious attack on a defenceless woman.

"Our view is that Jenkin deliberately strangled Tina into a state of unconsciousness in order that he could inflict these terrible injuries.

"Tina's life will never be the same, and her lifelong disability will be a constant reminder of the attack.
Violent relationship.

"Her injuries were so shocking that friends who saw her soon after the incident found it difficult to stay in the room."

Mr Strickland said Ms Nash's previous attempts to try to protect her abuser and change Jenkin were not unusual.

"Unfortunately, we do see that a lot and it's because they [victims] are positive, good people.

"But we would say that if you are in a violent relationship, it probably isn't going to change. People need to come to us and report if they're being abused.

"People can stop it by reporting it earlier."

Jenkin is due to be sentenced next month.
Click to expand...

He should be sentenced to the same punishment he inflicted, and no disability benefits thereafter.
B

sooey said:
He should be sentenced to the same punishment he inflicted, and no disability benefits thereafter.
Click to expand...

It's incredible but these women stick by these awful monsters.

Used to see it in the NHS.. you would have couples with restraining orders to keep the man away come to see the GP as a couple...bizzare.
Sponsored Links
H

sooey said:
He should be sentenced to the same punishment he inflicted, and no disability benefits thereafter.
Click to expand...

They do say an eye for an eye!
You must log in or register to reply here.

Woman ‘bites off her boyfriend's test**es’