So I built a Fort... and fell through it!

My wife was always complaining that there was nowhere to sit in the garden because it is on a constant slop.

So I built some decking... 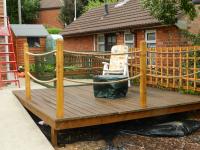 Then my 5 year old complained that he had nowhere to play in our garden.

So using off cuts from the decking I concocted a plan to build him a play fort... (these are recent photos from when I added a doorway rather than having a bar to climb under - I can't find the original photos). 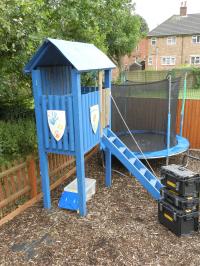 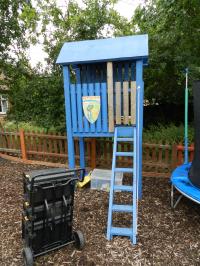 By the end of my week off I had made the main body of the fort, but no staircase. My boy was desperate to play on it because it was school holidays. So my wife convinced me to build a set of steps on my morning off - which in hindsight was a terrible idea.

A couple of days later, I stood my 6'11", 125kg self on the top step and started painting. After a few minutes there was a sort of click noise, but I ignored it and carried on enthusiastically painting (trying to score brownie points from my wife who was about to return home). As she walked through the gate there was a horrendous crack, followed by the sudden feeling that I was falling followed by a terrible pain in my bum cheeks and another loud crack.

The result was a screaming wife and a trip to hospital for some advice about this... 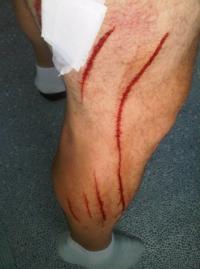 In my haste to build the stairs I simply screwed through the 6x2 and into the end grain of the "rungs" which were off cuts of decking. The cracking noise was the grain splitting. The top step broke and I dropped through the gap, the screws gouging my leg as I shot past them before my bum hit the second step and broke that too. At this point I was wedged, my feet were 10" off the ground still. I had shot through the wood so fast I had singed the hairs on my leg and the red patch at the top of my leg is actually a friction burn. Under the dressing a huge chunk of my leg was missing. My other leg escaped with just some short, light, scratches.

I can't help but laugh about it these days, especially when even though I was trapped, blood was dripping off my leg and I was hyper ventilating my little boy shouted "MUMMY, HAVE YOU SEEN WHAT HE'S DONE TO MY FORT?! How am I going to get in it now?".

2 years have passed since I fell through that set of steps and my legs still have terrible scars on them - I'm clearly never going to be a leg model. But I have learnt never to screw into the end grain like I did and expect it to take my weight. This was by far my worst DIY Disaster!
Sponsored Links

That's just a scratch, managed to paralyse myself painting my daughter ceiling.
D

Death of a Workmate
2