Hi all,
I'm now tackling another room of the house - the most important - the office. The lockdown period has proved the importance and luckily we have the space for a dedicated room. Historically, this was used a bedroom and part of an extension. House is originally 1902 but not sure on the extension part. It's in keeping with the rest of the house and so is around 400mm thick solid stone. As it's in South Wales...black mortar as far as the eye can see.

This 3x3.4m room was very damp when we moved in, having been dot and dabbed to a seemingly good standard but little ventilation owing to the 30 year old UPVC. One wall had signs of damp but that said had fitted wardrobes against it. I remember removing them and there was condensation on them but that is no longer present. This wall also had a hearth as per my other thread but thankfully there is timber boxing in the dust and debris under the quarry tiles. I'm hoping that this just needs a clear out and a new bit of joist to allow the floor boards to sit neatly (some of which has missed the damned joist completely due to the hearth tile width and are a bit too flexible for my liking!). 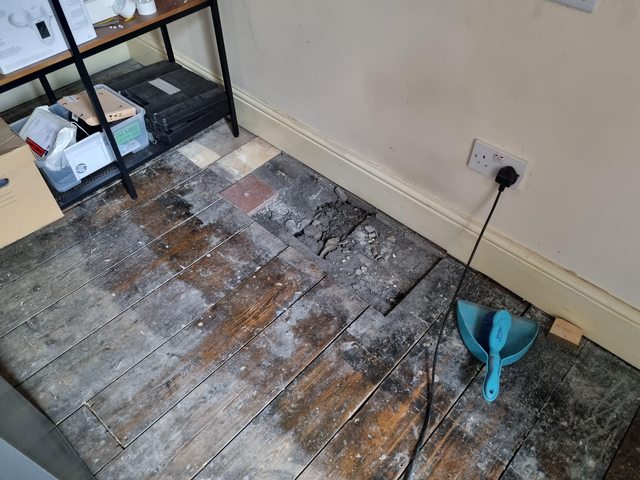 There is also no loft access and I suspect the entire room was just re-boarded. It gets damned cold without the rad on and so I have someone coming to fit a loft hatch and we will see what's what then. I suspect there's no insulation above me at all.

Below is the kitchen where I can hear the goings on, and occasionally cooking smells. We have some very patchwork floor boards also, and of different sizes, some of which must have been up and down over the years like a yoyo and need to be replaced. 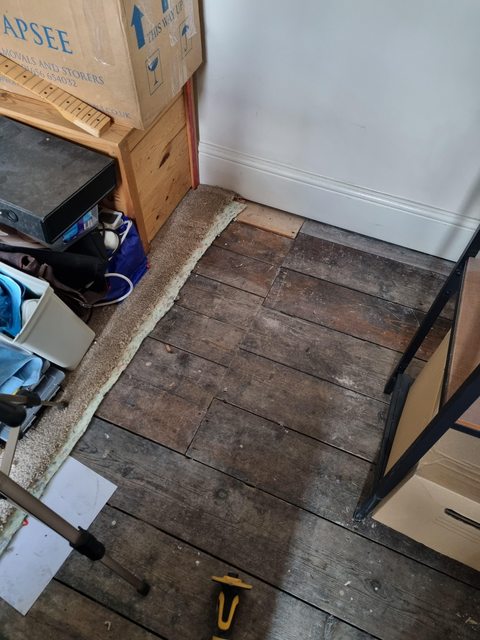 I've started rewiring and I am also going to replumb the radiator as it's currently coming out of the bloody skirting board on one wall. As part of the rewiring I've noticed there's no insulation below the boards (and the the plumber didn't lag any of the pipes he laid last year!). And in typical form, I now have grander ambitions... (#scopecreep).

Joists are approx. 410mm centers but vary. Depth to the ceiling below is 170mm.

I'm not bothered about the flooring tbh- don't mind the rough and ready look so the plan was to patch up the boards that need replacing with reclaimed from a reclamation yard. The carpet that is being ripped up will stay off for the time being. I don't want to spend too much on this as I may choose to redo the floor altogether. Plus I have some boards form the other room that I could use at a push. I do want to insulate effectively though and principle is sound protection.

I am planning to use joist strips and thinking of something like Thermafleece beneath the boards. But aside form that, what would be your recommendations? I don't know how this compared to Knauf Eko and am looking at the specs. Cost is a factor but I'm not going to go bargain basement - value for money is important so a bit more for better R values etc may be worth it.

And any recommendations for reclaimed flooring in South Wales welcomed.

Why would you expect a room to be warm without the heating on?
Thick carpet and underlay would improve sound insulation.
Sponsored Links

foxhole said:
Why would you expect a room to be warm without the heating on?
Thick carpet and underlay would improve sound insulation.
Click to expand...

To qualify, the heating may have been on around the house, but this room is noticeably colder than others. I wouldn't expect it to stay warm forever but it only does so when the heating is more or less on constantly.

BillyWillySilly said:
To qualify, the heating may have been on around the house, but this room is noticeably colder than others. I wouldn't expect it to stay warm forever but it only does so when the heating is more or less on constantly.
Click to expand...

Extension , uninsulated can be colder due to there exposed position.Often with three exterior walls.
Sponsored Links
You must log in or register to reply here.

S
To screw or not to screw…

Yesterday at 9:44 AM
JimCrow
J
A
Finishing a solid wood floor that has a step down to the kitchen