Pergola on a slope

Hi
I'm trying to build a pergola (and decking) with the help of my son, carrying on from where his late father left off.

Neither of us has done this before and we've run into a problem.

Over the length of the decking, the ground slopes down, one side to another, about 30cm over 3.6m.

We've decided to use posts concreted in holes. The deck plan is fine, but there's a snag with the pergola posts.

The problem is, with 3m (4x4 inch) posts at the high end, a hole 60-70cm deep will give a good headroom (taking the deck height into consideration). At the lower end, to keep the post height level, the hole can only be about 30cm which I don't think will be enough. As it seems impossible to get posts longer than 3m without paying a fortune we're a bit stuck.

We don't think building up the soil around the hole to make it deeper will work as that soil won't be compacted or supported by adjacent soil. Or would it?

Son has said in USA they often use a tube in the hole. The tube is longer than the hole so when it is filled the top is higher than the ground. They seem to do this for bolt on brackets because the hole depth they need - 1m and more (their building regs I think) would make the posts incredibly long.

I haven't seen these tubes but I wonder if a wooden frame could be used round the hole so that when the concrete is put in, it will be deep enough to hold the pergola post? My concern is that the top part of the concrete pillar will be unsupported and it may crack and fail.

I'm sure I'm not the only one who wants a pergola on a slope. The feather board fence obviously follows the slope but I don't want to dig the posts up to see how they were done!

Does anyone have any suggestions to get a nice, secure outcome? Do we have to shorten the posts at the high end and compromise on the pergola height? Excavate soil to make it level (massive amount of digging and spoil)? Something else?

Also is stuff like Postcrete good enough for this kind of work or should we get a mixer and make our own?

Thanks in advance everyone.
Last edited: 30 Aug 2022
Sponsored Links
C

If it is grass/soil on the lower side you could use a 'MET' post sunk into the ground to give extra length to the support post. 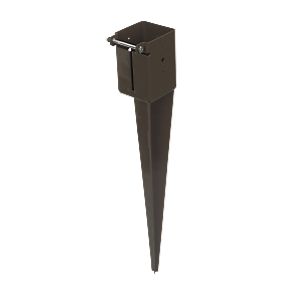 Order online at Screwfix.com. Erect fence post in minutes without digging holes or mixing concrete. Drive the post support into the ground with a sledge hammer and the 3-fin steel spike will provide secure anchorage. Made from mild steel, galvanised then powder-coated for long life. FREE next...
www.screwfix.com

You can dig the hole, fit your post in to the support, put the support into the hole and after aligning it vertically pour your concrete in.
This should give you the height you need above and the support you need below.
R

Hi. You mean treat the Met post thing as if it was part of the post and bury it along with the bottom part of the post? Interesting idea. I'd be worried about the post/metpost join flexing. How deep would the join need to be to make it secure? Anyone any idea?

It is soil all round the decking area. Well, pretty naff soil actually. Very heavy clay with layers of flat stones that son says is awful to dig through.

I couldn't grow anything in this area because it wouldn't drain. Hence covering it up with the deck will get some use out of it.

I'll see son tomorrow so will discuss this idea and anything else we/you can think of.

What sort of height for the pergola is usual /typical?

Another question I have is what keeps the post from moving? Why is 600mm depth required and 3x post wifth? Is it the size of the concrete block that's kept in place by the soil? If that's the case, would 300mm hole which is 6x post width just as good? Or 800mm deep but 2x post width? Does the concrete have to go all the way to the top of the hole? Forgive the silly questions but I'm trying to understand what is required because I don't want it to go wrong and have to redo it. (And I know that my son definitely would not want to do the digging again!)

There are plants you can find to grow in poor soil and fruit trees like that kind of heavy soil to dig deep roots. If drainage is a problem then you could consider developing a wetland garden - but if you really want to build decking and a pergola then perhaps you can find a couple of landscapers to give you an appraisal of the area to discuss options. You're not under an obligation to accept any quotes but you might pick their brains for an idea how to finish the job.
Got any pics?
Sponsored Links
C

You can hire hole borers instead of 'digging' a deep hole. Something like this but you can also get manual ones which you turn by hand.

For the depth you need to work out how much you want projecting above the soil, subtract this from the full post length. The result is how deep the hole needs to be plus a few inches to put some drainage stones/pebbles at the bottom. If you are using a MET post you will also need to add the length of the post on to the hole depth. The concrete doesn't need to come to the top of the soil level but if it does you can slope the top of it and then cover with decorative shingle. The wide the base of the concrete the less likely it is to 'wobble', so a base/boot 300mm (3 post thickness) is better than one 800mm wide, (2 post thickness. Obviously the deeper you can sink the posts the stronger they will resist movement.
L

As a socket for 4" posts I use 6" drain pipes cut to length but if you have your verticals connected with horizontal timbers the deeper posts will help brace the shallow ones.
R

Hi guys thanks for your replies.

Sorry don't have any pics. They wouldn't show anything other than bare earth on a slight slope.

There is no drainage in this area. The bed of clay goes down 2m and is solid. I've considered bog Gardens etc, but decided against. The garden is a big enough job to take care of at my age so a deck would also reduce the work load.

I would like a decking area and building it here kills 2 birds so to speak.

We have an auger which is effective. Slow, because the rocks and stones need to be cleared from the hole else it jams. Digging the hole isn't the problem, it's slow and hard work but we can dig through it. The problem is to get the hole depth and maintain headroom I need longer posts but I can't find any local that are reasonably priced and UC4 rated. Going further afield increases carriage costs to the point where its not affordable - minimum £150-200 carriage, £40-60 for the posts. Not affordable I'm afraid.

This cannot be a unique situation srely someone must have experience of this kind of problem?
Last edited: 31 Aug 2022
R

Sorry, didn't mean to submit post. Thanks for the link to the hole borer. Neat solution, and not bad priced. Son is using a large auger on SDS drill and it's pretty effective. If we were starting again, I'd hire one for the weekend but we only have 3 holes to dig and they're already 30cm deep so not much benefit of a borer. Son didn't know you can get 1 man borers...

Lostinthelight, (you posted as I was writing) are you saying that you don't have a wide hole, just 6inch pipe and you concrete the post in that? Is that secure? 6 inch obviously doesn't come close to 3x post width, so I'm really confused.
L

Ok, LitL (hope you don't mind the abbreviation). That's interesting, I interpret that as a short piece of 4x4 in a hole to the normal depth, filled with concrete, and another post screwed/bolted to the first one, going to the height required. I suppose the join could also be encased in concrete as well?

It's a bit like Conny's Met post extension. Would joining the posts be secure? I'd be kinda worried about the join opening up and the top post moving.
L

Anything that saves typing is good in my book.
If you don't want to, or can't use the right length posts then you have to make the best of what's readily available whether that's met sockets or fixing to short posts.
Pointless piling concrete around the joint
D

Forget the MET post extensions use 'Repair Spurs' (concrete soldiers) instead. Bolt the posts to the soldiers once the concrete has cured. That is why LITL is trying to illustrate in post #9. A
A much longer lasting job as the posts are simple to replace when (not if) they rot.
R

LitL, you're absolutely right, the problem is working out the best solution, bearing in mind the difficulty of redoing it if something goes wrong.

DiverFred, thanks. Your suggestion is similar to LinL, except using concrete rather than wood post. A good suggestion, I'm going to look for those things,check price etc.

My son has looked at the hole again. He calculates that the bottom of a 60cm hole would be about 100cm below the deck level. A 3m post would only be 2m above the deck, and the beams etc even lower. We can't lower the deck height because it's adjacent to a patio and path so we have to come up with a way of having longer posts.

He thought about using UC4 structural timber. Two 100x47mm lengths screwed together maybe with a small spacer between them to stop water being trapped. That would be about the same size as 4x4 post and are available in long lengths - 3.6m and longer. The cost is about the same as the posts. We could even use 125x47 for a bit more strength. What does anyone think about that?

The weakness in these solutions are the joins. The metpost idea would have the join incased in concrete, the two 4x4s possibly also. Fred's idea has the join in open air, but uses the soldiers in a way very similar to their design use, though I wonder about play where the posts are bolted through. Structural timber has the wood screwed/bolted together in several places but I wonder if the screws would be strong enough.

You have various suggestions so just get stuck in.