Need to replace a standard rim cylinder, however the nightlatch has a double locking key hole on the interior deadlock leaver. 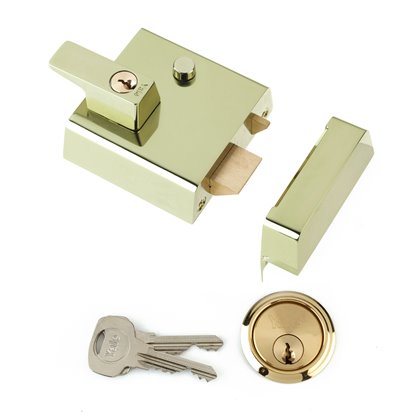 If I replace the rim cylinder, will the rear lock accept any standard yale key? The keyhole on the nightlatch rear does not seem to have an actual cylinder/locking mechanism within it. Are these just fake keyholes that just engage the main rim cylinder from the other side and lock the handle in place?

What I am getting at...can I just replace the rim cylinder without replacing they keyed nightlatch?
Sponsored Links

No, and no. A new cylinder and key will work from outside of the house, but not the inside. Perhaps your inside one is already broken or does not match the key.

Consider spending the extra on a BS3621 nightlatch
D

Will do. The cylinder is buggered on the inside as it takes an age to get the key to fit the lock, it feels like it is the wrong key (they are not copies). It seems to fit fine on the other side though as the key fits and turns easily and locks the handle fine.

I assume the new shroud shape of the BS3621 nightlatch is compatible with the standard circular fitting above?

depending on make, you may need to drill for retaining pegs on the external armoured cover, but the big hole should be OK.
Sponsored Links
D

The side-dimpled keys are supposed to be more difficult to pick, so should withstand raking or bumping. Eurocylinders as found on most plastic doors are very vulnerable. The armour on BS models protects against snapping.

There is also the Chubb (now branded Union) 4L67E which has a quite different key mechanism, and probably no ordinary burglar would try to open it, and would look for an easier or more forceful way in. It is rather expensive.

Your door should preferably also have a 5-lever BS3621 mortice deadlock, which is immune from these simple attacks, and stronger as well as cheaper than a BS nightlatch.
Last edited: 30 Mar 2016
D

Yes - it already has a BS chubb 5 lever mortice as the main lock so this is already a secondary latch more than anything else.

My other upvc door also has a 5 lever mortice which I prefer over the eurocylinders.
D

Well, I worked out that the existing nightlatch keyhole was already defunct. I can only assume the cylinder had been replaced at some point in the past. The cylinder was ERA and the nightlatch was Yale.

So, as the nightlatch was in working order I decided to just be cheap and just replace the cylinder again. Considering the door has a 5 leaver mortice I think it is a safe course of action.The nightlatch has the auto deadlock so that is the most important function in my mind.

I managed to find a slightly higher spec yale X5 cylinder (I know for pros it is not much more secure) for only £5 at homebase. So it was cheaper than all the budget cylinders anyway. The keys are nice an large compared to the standard ones too.
Last edited: 5 Apr 2016
D