Hi, I had a double glazing company in to replace a Victorian sash window with a standard casement upvc window. When complete there was large plastic framing/architrave surrounding the inner surface. I have had these pieces of plastic taken off as I'm redoing the room, only to discover massive 8-10 cm gaps around the side and top of the window back to the outer brick face (see picture) 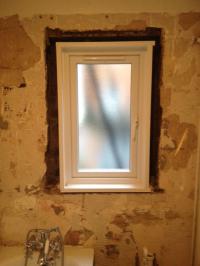 The window is only fixed to the outer brick surround, on the inner it is free, it seems to be fixed on the bottom surface also.

To me this looks like a dodgy installation, I though this gap would be filled. I didn't expect to see the exterior wall space not to mention the loss of any insulating affect.

Does anyone know: Is it ok to fix the window just to the outer face? The window itself does seem fixed, it doesn't move around, but I don't think the work has been finished to the required level. Does this look like an unacceptable installation to anyone else?

In terms of fixing this, should this be space be filled with bricks and then sealed top the inner face? Any comments appreciated.

The reason you have this gap is because of the boxing that was needed to accomodate the weights, this gap is normal when converting to a standard casement.

I didn't expect to see the exterior wall space not to mention the loss of any insulating affect Ideally they should of AT LEAST used expanding foam, if they were really posh they'd have filled it with bricks and mortar, finished with skim and then picture framed it with a nice architrave, maybe even incorparating a little stub cill across the bottom.

Unfortunately window fitters always seem to work at 100mph, either they've not been given enough time to do the job or they're working to a price not day rate, believe me if they were on day rate they'd still be there now, you'd of had the poshest window in the street.

Would i accept that, well so long as there was foam in there and the trimming and sealing up was neat then yes but over time i'd probably replace the trims with wooden arhitrave, in fact i'd tell them not to bother finishing the inside as i'd do it myself but then again being an ex fitter i'd of been fitting my own windows anyway.
Sponsored Links

I've had the same thing and found that 50mm insulated plasterboard fills the gap nicely and my plasterer has skimmed up to the window making a nice finish with no need for wood/plastic extras.
M

Get some soft breeze blocks, trim it to size with an old handsaw if needed plus mortar
Sponsored Links
G