Any one else had problems with wifi light switches?

To be frank the switch is three years old and been fitted many times in three houses, it did work A1, however this house in a room with 5 x 5 watt candle LED bulbs on a chandelier using a Maestro slide in ceiling rose with hook.

Now third time had a problem, the ceiling rose was suspect and also the Energenie switch, so first twice not sure which one at fault, and after removing the light switch and replacing it on retrying it worked.

This time however only touched the light switch, and swapping back to simple on/off all worked again, so now reasonable sure the switch at fault.

The problem is remove a bulb or unplug lamp and switch auto switches off, so can't test in normal way, I have 5 of the switches, this is only one I have had a problem with, and it is the oldest.

But on refitting it works A1 again for weeks, so even now not sure it's the electronic switch, idea was the room lights also light the drive, so switching on lights in the car helps see way to house. May use it in a back box for Christmas lights, but not fitting to wall again.

So wonder if just an odd fault, or if others have also found these switched stop working then spring back into life? 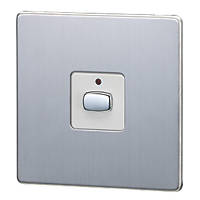 Sponsored Links
You must log in or register to reply here.

E
2 gang 2 way switch Switch 1 on and off are reverse but Switch 2 is correct.

Today at 6:58 AM
bernardgreen

Yesterday at 6:51 AM
ericmark