Drilling into RSJ lintel - will it take my bodyweight?

I'm installing a fingerboard called a Beastmaker (basically a wooden board you hang from or do pull-ups on) on to what I think is an RSJ-lintel. It's where the house was extended once. The board is to be installed using 6 screws which go in about 3 or 4cm, which come with it and presumably must be enough to easily hold bodyweight.

Drilling through the side of the lintel, there's a void after about 3cm. That 3cm of drilling seems to be made up of some fairly solid plaster but just before reaching the void it felt like there was something a bit more solid which required a bit more push.

I don't know anything much about lintels, but I'm assuming the the RSJ will be like an 'I'. I think then that means the plaster I've drilled into will be sitting on some steel - is that right?

The big question is will 3cm of what looks like solid plaster be enough to easily hold my bodyweight? If not, I was thinking I could maybe fill the void with concrete and use some longer screws. Or is that a silly idea? And then I though about using some self-drilling screws which go through into the RSJ itself (like these), but maybe that's an even worse idea?

I doubt very much that 3 cm of plaster would hold your weight especially as you'll be swinging on it.
if your sure its an RSJ there should be some wooden noggins whacked into it between the 2 flanges for the plaster boards to nail onto
like this 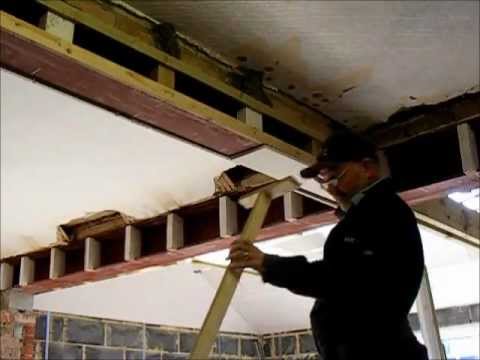 if you use a stud finder to find them, I think it would be better to screw into these than just plaster
J

I've borrowed a stud finder so will try that later. The person I borrowed it from said that these noggins within RSJs are only loosely nailed in. Is that likely, or would you say they're generally okay and I'll be alright using them? Assuming I can find them, that is.

well I normally knock them in pretty tight myself,
as the weight will be pulling downwards I think you've got a better chance it holding than just into the plaster.
depends on a lot of things really, how much you weigh, who studded out the RSJ etc
if it was me, id try screwing into the noggins near the bottom if possible and see how it goes, you'll probably know when you start to put weight on it (don't just swing straight on it) if it feels strong enough, but if it doesn't feel like it will hold the only real alternative I can think of is find the ceiling joists and fix it to the ceiling instead or drill straight though the RSJ and bolt it.
J

So you don't think these Grip-Its would be an option instead? I'm concerned I won't be able to find the RSJs.
Sponsored Links
N

no mate don't use the grip-ins
J

kazuya said:
no mate don't use the grip-ins
Click to expand...

I get it. I'll let you know how it goes. Cheers.
T

I installed a beastmaker a couple of months ago, and posted here:

It can easily support my weight, I'm around 70kg
J

Still not quite there with this...

I'm now thinking the lintel is a box lintel as the metal detector seems to be picking up metal close to the surface on the bottom and both sides. Looking around, box lintels seem to be for walls only one brick thick, while this looks more like two bricks to me. I suppose that's because it was put in an older external wall. No paperwork to look at.

Next question then: can I just drill into the box lintel? Not sure how thick/strong they are at the sides.

Thanks,
Clive
You must log in or register to reply here.
Sponsored Links